WASHINGTON, DC - MAY 27: Characters from the Star Wars franchise stand for the playing of the national anthem during Star Wars Day at Nationals Park prior to a game between the San Diego Padres and the Washington Nationals on May 27, 2017 in Washington, DC. (Photo by Matt Hazlett/Getty Images)

Home » Sports » Attack of the clones:…

Everywhere you look in the sports world these days, you'll find Star Wars theme nights. How the ultimate minor league promotion was conceived and made it to the big leagues.
Listen now to WTOP News WTOP.com | Alexa | Google Home | WTOP App | 103.5 FM

Back in 1977, when Comic-Con was just a few thousand obsessives, rather than the 130,000 it is today, George Lucas unleashed Star Wars into the world.

While the film was an instant phenomenon, its hardcore fans hardly crossed over into the professional sports fan demographic. It would have been hard to imagine that, 42 years later, Major League Baseball players would not simply be embracing, but helping to design Star Wars bobbleheads featuring their likeness.

But to figure out how we got to this point, first we need to go back to how and where it all started.

‘History has a way of everyone having their own truths’

Let’s start with the facts upon which everyone can agree. Sometime in 2006, Grand Rapids, Michigan television reporter/anchor Brent Ashcroft reached out to Mickey Graham, then the head of promotions with the West Michigan Whitecaps, a single-A affiliate of the cross-state Detroit Tigers.

Ashcroft is a lifelong fan of the Star Wars franchise, ever since seeing Episode IV in theaters when he was nine-years-old. He has a room in his basement dedicated entirely to the Vintage Collection of Kenner toys from 1977-1985 — “much to the chagrin of my wife, who thinks I’m nuts.”

Ashcroft had joined the 501st Legion, a Star Wars-themed cosplay club in late 2005, enlisting in the Great Lakes Garrison. The 501st Legion was founded by fans in 1997, but was folded into the Star Wars canon in 2005. Members even appeared as extras in the upcoming series “The Mandalorian.” It includes nearly 14,000 fans across the globe.

After appearing in costume a few times, Ashcroft had the idea to approach the local baseball club. 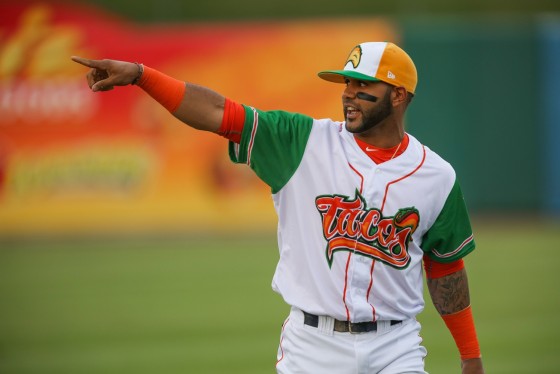 In the race for the next best idea, the minor league baseball food wars have moved from the concession stands onto the field.

“At first, he was a little apprehensive,” said Ashcroft.

By June, Graham called back with the go-ahead. He remembers 20-30 members roaming the concourse in full, movie-quality regalia. Ashcroft thinks the number was higher.

Both agree on the raging success. The draw was enough to prompt the team to design a Stormtrooper theme jersey for the 2007 season, and to go back to the well every year since. And if you see costumed characters at a Star Wars theme night, chances are they’re members of your local chapter of the 501st Legion.

“The atmosphere was amazing,” said Ashcroft. “The people bought into it. The team really poured their heart and soul into making it a very Star Wars-atmosphere night.”

Even as other teams around the minors followed suit, Star Wars Night has continued to be a success in Grand Rapids. The Whitecaps are one of the better draws in the Midwest League, averaging between 5,500 and 5,800 fans per game over the last four seasons. But their Star Wars Nights have averaged better than 9,000 over that span, bringing 60 percent more fans than a regular night.

“Usually it’s one of the more crowded nights we have,” said Graham. “People circle it on the calendar. We’ve had people [from the 501st Legion] come all 13+ years.”

While the Whitecaps have been at the forefront of a lot of minor league trends, including the ever-escalating food wars, Graham is reticent to accept too much acclaim for this particular origin story.

“We stumbled onto something that works well,” he said. “We can’t take full credit – we’re not George Lucas.”

‘No one easier to deal with’

Down I-95 in Woodbridge, the Potomac Nationals have been giving Star Wars Night the full treatment for the last five years. The P-Nats made headlines and won a national MiLB contest with their 2015 Lando Calrissian Cloud City jerseys. They’ve made it a point to zig where other teams zag, all while still embracing everything that Star Wars Night brings to the park.

The Lando Calrissian Jerseys are IN! The P-Nats will be wearing them this Sunday for #StarWars Day at The Pfitz! pic.twitter.com/uS8u4e4U85

Any promotion that involves copyrighted material requires a willing partner on the other side. Minor league budgets are tight, so teams really have to be judicious where they spend their money. That’s just another reason Star Wars was such a good fit in the minors: not only does Lucasfilm provide what a representative called an official tool kit filled with Star Wars content, they do it for free.

“When they give you permission, you get the full gamut,” Bryan Holland, P-Nats General Manager, told WTOP. “You get a media kit, you can use the logos. They’re extremely interested in making sure that the execution on the back end is done in their vision, and rightfully so.”

Lucasfilm even gives advice on what might be most profitable, even though they don’t see any money from the promotions. Holland said for this year’s 20th anniversary celebration of Episode I: The Phantom Menace, they explained that a Darth Maul jersey would sell best. But the P-Nats wanted to go their own way, instead depicting a scene of young Anakin Skywalker podracing.

Other teams have gone different directions, jerseys running the full gamut of characters, from each of the three trilogies. The local 501st Legion even brought a life-size Jabba the Hutt to the concourse at a Buffalo Bisons game last year. No matter what the focus, the success has been resounding and the night has become a staple of many teams’ promotional calendars every year.

“The success we’ve found with these games is due in large part to the fact that there is such a natural overlap in the fandom with both being such a multigenerational experience,” said the Lucasfilm representative. “The passion of the Star Wars fans in the local markets who help contribute to making these games special really put the events over the top.”

The only thing Lucasfilm really discourages is bobbleheads at the minor league level, simply as a matter of scale. But that’s not a problem for a Major League team.

‘One of the highlights of my career’

Even as the minors continued to find success with Star Wars nights, it wasn’t until recently that Major League teams finally bought in.

Star Wars Day arrived in Washington on July 19, 2015, a stiflingly hot and muggy summer day with temperatures in the upper 90s coupled with dew points in the mid-70s, yielding feels-like temperatures somewhere north of 105 degrees. It was, no doubt, hotter than that in costume.

But that didn’t stop the Nats from bringing Star Wars Day back in 2016, adding a Chewbacca Koozie giveaway in 2017. This year on June 15, for the fifth year of the promotion, they couple it with an Obi “Sean” Kenobi bobblehead, influenced and partially designed by closer Sean Doolittle, himself an enormous Star Wars fan.

when you have the high ground pic.twitter.com/tccnCfdWJ4

“I was actually surprised when Major League Baseball teams started doing Star Wars nights,” said Ashcroft. “When I grew up, Major League Baseball, you never had theme nights. That was serious baseball. You came for the game. You got out your beer and your brat and you watched nine innings of baseball. And now, you’ve got Chewbacca throwing out a first pitch and you’ve got Stormtroopers and Darth Vader walking amongst you on the concourse for a night at a Major League Baseball game? It’s just great. It’s brilliant.”

As a lifelong Star Wars fan, the success and proliferation of the theme night fosters a sense of pride for Ashcroft.

“I kind of feel like I have a little piece of the pie in this whole universe,” he said.

Minor league promotions can often be cast aside as beneath the majors, but at the end of the day, you can’t argue with butts in seats. For people like Holland and teams like the P-Nats, who pride themselves on their creativity and innovation, the adoption of Star Wars Night in the bigs is a sign of validation from above.

“It’s a beautiful thing,” said Holland. “When David can put together something that impresses Goliath, man, that feels really good.”

So, how many professional teams have held Star Wars theme nights?

“Hundreds including NBA, NHL and NFL,” said Lucasfilm. “We’ve worked with every team in MLB.”

In case you’re wondering, May the Fourth didn’t become the linchpin date upon which teams tried to pin their promotions until it gained mainstream popularity in the early 2010s. A Toronto Underground Cinema festival appears to be the first commercial embrace of the date, which Disney picked up upon after purchasing Lucasfilm the next year.

This year, buoyed by the convenience of it landing on a Saturday, May the Fourth celebrations were everywhere across sports. Teams across MLB, including the Baltimore Orioles, held Star Wars Night with a Trey Mancini BB-8 Bobblehead. In professional women’s soccer, The Washington Spirit held its first-ever Star Wars Night, giving prizes to fans that dressed up.

And they don’t show signs of slowing down anytime soon. If anything, with new movies and television series on the horizon, Ashcroft believes the trend will only continue to grow.

“Star Wars nights at sporting events are not going to die,” he said. “It’s just not going to happen. In fact, it wouldn’t surprise me at all if some teams add two to their calendar.” 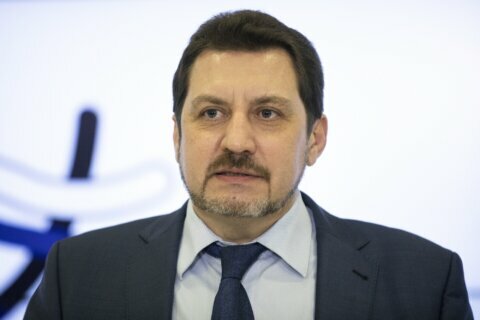 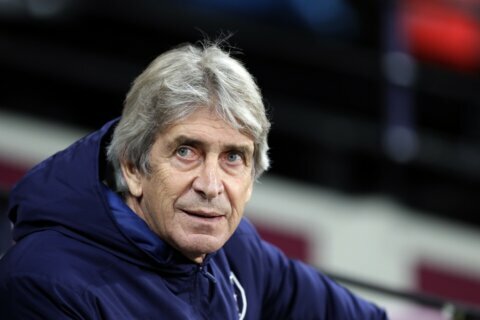