A new bill in front of the D.C. Council would legalize and regulate sports betting in the District. But how would it all work, who would it benefit, and when would the infrastructure actually be in place if the bill passes?
Listen now to WTOP News WTOP.com | Alexa | Google Home | WTOP App | 103.5 FM

WASHINGTON — Ever since the Supreme Court overturned the Professional and Amateur Sports Protection Act (PASPA) in May, effectively rendering the opportunity to make sports gambling legal under state jurisdictions, there has been a gold rush to take advantage of the new market. On Wednesday, the D.C. Council’s Committee on Finance and Revenue held a hearing on the recently introduced Bill 22-944, also called the “Sports Wagering Lottery Amendment of 2018.”

Even if the bill passes, it will still be a while before you can legally place a sports wager in D.C. But there is an urgency among the bill’s sponsors to move it through quickly, leaving just a couple of weeks for changes and clarification on a number of points unaddressed by the first draft.

How will this work?

Six states have already passed bills and brought sports gambling online since the overturn of PASPA — New Jersey, New Mexico, Mississippi, Pennsylvania, Rhode Island and West Virginia (Delaware, Montana, Nevada and Oregon had laws grandfathered in before PASPA). But the structure of how sports gambling is regulated, taxed and managed on a commercial level varies wildly between them.

Every state has licensed their sports books through either the existing casino infrastructure, or the state lottery, as D.C. is proposing. Councilmember Jack Evans, a Democrat who represents Ward 2, who introduced the bill, said Wednesday that he foresees five major venues  — Nationals Park, Audi Field, the Entertainment and Sports Arena, Capital One Arena and the Convention Center — as the initial brick-and-mortar establishments, with hotels, bars, restaurants and other local operators able to potentially join them.

Under the current bill, obtaining an operator license would cost $50,000 and be good for five years. But there is no limit to how many operators can exist, so long as they meet the vetting requirements.

“That does become a point that the Council’s going to have to weigh very considerably,” Sara Slane, senior vice president of public affairs for the American Gaming Association (AGA) told WTOP. “How is it going to be administered? How is the oversight going to take place when you have multiple license holders, and what does that look like?”

There is also the likelihood of a highly mobile-centric industry. In Nevada, 70 percent of bets are already taking place on the mobile app, according to Slane. One can imagine in an urban environment like D.C., without existing casinos, that percentage could well be significantly higher.

“Most people are betting illegally on their phones,” said Slane. “In order to shut down the illegal market, the legal, regulated market has to be able to compete. So that mobile component is really important.”

The more licensees, the more competition and, theoretically, the better odds offered to the consumer. It may also mean more jobs and more money spent on marketing and advertising, something a single entity would have little incentive to invest in.

However, that could have a downside, as well. With no defined limits on which sports are fair game, the market is wide open. If, for instance legalized markets refuse to take bets on college sports, which are much more fraught with corruption opportunity, the black market will continue to thrive there. There is, believe it or not, already a market for high school sports.

“It’s not really a race to the top — it’s a race to the bottom,” Keith Whyte, executive director, National Council on Problem Gambling, told WTOP.

Whyte sees the combination of what he calls the “Three A’s” — advertising, action and accessibility — as an unknown quantity in the American market. With the ability to bet not just on game, but on anything and everything within individual plays, it has the potential to look unlike any prior market.

“The way we see this trend coming is going to take some of the most aggressive models from around the world and combine it all together in a way that no one’s seen before,” said Whyte.

Sports gambling is, to be certain, already happening in D.C. The estimated size of the black market varies greatly, depending on the source. But whatever it actually is, bringing it online to a regulated, taxed system is an opportunity for state governments to boost funding. Evans made quite clear Wednesday that is his primary focus, even asking one of the witness panels, point blank: “At the end of the day, what can make the most money for the District of Columbia?”

As written, the bill splits tax revenue derived from legal sports gambling 50/50 between the Birth-To-Three for All DC Amendment Act of 2018, funding early childhood education, and the Commission on the Arts and Humanities.

“It is so important that we invest here, but it costs a lot of money,” Councilmember Robert White, D — At-Large, said Wednesday of childhood development programs. “So when we have an opportunity to create a new market, a new revenue stream that really can fund early childhood development, I think that we have to act.”

However, multiple parties at Wednesday’s hearing are asking for their own funding carveouts, most notably the NBA via an integrity fee (as it has done elsewhere) and the National Council on Problem Gambling (more on that later).

But how much actual tax revenue are we talking about? In Nevada last year, $4.87 billion was wagered on sports gambling. That’s far from representative of your average state, though, as the only place that offered any kind of legal sports gambling in 2017, attracting much of that money from tourists. That $4.87 billion translated to $248.8 million in revenue, or roughly 5.1 percent of the overall amount wagered.

The D.C. bill only taxes revenue, at 10 percent. Meanwhile, an AGA report indicated that 71 percent of current illegal sports bettors would shift at least some of their wagering to legal sports books, if they were available. Taking all of these factors into account, even if the annual sports gambling black market in D.C. totaled $100 million, and even all of the 71 percent surveyed were telling the truth and brought all their money to the legal market, the District would only make $362,100 per year in taxes.

Jeff Ifrah, founder of 501(c)3 iDEA Growth, was one of the witnesses Wednesday. Ifrah said that it took four years for online gaming operators to turn a profit in New Jersey, because of all the money spent on marketing, another issue that could further cut into the city’s tax revenue. He suggested expanding the bill to include internet and mobile gaming, specifically including poker and casino games as well.

That doesn’t appear to be on the table for now, though it potentially could be for the future. The 10 percent tax rate is low (England’s is 15 percent, and among the new bills in America, Pennsylvania’s is an outrageous 36 percent). It’s not as simple as raising that tax rate, though. The whole point of the low rate is to give people enough incentive to abandon the extra risk of the black market without cutting into their profits and compete with other states in the region for those dollars.

Of course, the idea isn’t just to convert the existing gamblers, but to create new ones, something both proponents and detractors of the bill expect to happen.

As mentioned about, the District stands to gain additional tax revenue, and the potential for secondary benefit through new jobs and advertising and marketing dollars being spent in the city. Additionally, operators of the sports books themselves — which may include some local shops, but will likely be dominated by the likes of MGM and daily fantasy sites DraftKings and FanDuel, all of which had representation at the hearing Wednesday — will stand to gain from entry into the market.

These companies benefit not just monetarily, but also by the acquisition of user data and betting habits. This can help them maintain better integrity over the contest themselves, by making red flags in betting patterns more identifiable, which is crucial to the trust built into their business. But it also allows them to target-market to an additional consumer base more effectively.

The reasons someone like Monumental Sports CEO Ted Leonsis — who has been pushing for legalized sports gambling for some time — would benefit are manifold. First is the ability to run his multiple buildings as operators, taking a cut. Then the potential for the leagues he is connected to also to take an integrity fee, as has been suggested. Additionally, research has shown that gambling on sports drives more interest in fans, something anyone who plays fantasy football or daily fantasy sports can already attest to. The end result is more fans spending more time, energy, and money with Monumental Sports properties, with a percent of everything going back to Leonsis.

There is also benefit for the existing sports bettor who is doing so illegally, in regards to minimizing the risk involved by doing so legally in a regulated market.

A Nielsen study commissioned by the AGA suggests that sports bettors are generally more affluent and better educated than the general public. However, another recent study of those who would bet on sports if it became legal in their state indicates that’s likely to change, with those numbers trending both younger and poorer. That jibes with Whyte’s understanding of the landscape.

He sees the high-risk cluster of potential problem bettors as mostly young males, 18-24, who also display high-risk profiles for things, such as alcohol or other forms of gambling.

Whyte’s group is calling for either a small percentage or a set fee to be set aside to help fight gambling addiction. He said his organization currently fields roughly 2,500 communications per year from the District from those seeking help, but that the lottery commission does not have any actual infrastructure in place to help with gambling issues, and hasn’t since the government became involved with it decades ago.

“When government legalizes, regulates and profits from gambling, they have an obligation to use some of those revenues to give back to those who are harmed,” he said.

Both Whyte and council member White pointed to nationwide gambling addiction figures of 2.2 percent, which would equate to nearly 15,000 D.C. residents. But Whyte said no survey has ever done of gambling problems in District. Adding in additional risk with legalized sports betting only adds to his urgency to get something in writing before the ink is dry on the bill.

“Once the legislation’s done, once it’s operating, it’s very hard to go back and reverse engineer it, and clamp down or put protections on it,” Whyte said. “So those really need to be built in from the start.”

“If all goes well, I hope to have this passed and on the mayor’s desk before the end of the year,” said Evans Wednesday.

If the bill passes out of the committee and the Committee of the Whole without a veto, it is sent to the federal government, for a 60-day period of Congressional review. If it is not acted upon, it becomes law, at which point it would take another four-to-six months for operators to be in place to actually take bets. So while the bill may be moving fast, actual sports betting in the District would not be available to consumers until at least the late spring or summer of 2019. 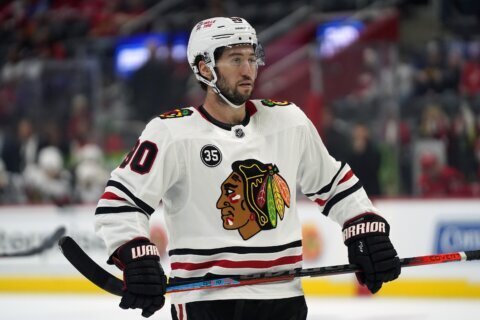