For the last 66 years, Scully has been the voice of the Dodgers, first in Brooklyn and then in Los Angeles. He spoke with WTOP about how he got his start in radio during a summer in Washington.
Listen now to WTOP News WTOP.com | Alexa | Google Home | WTOP App | 103.5 FM
(1/10) 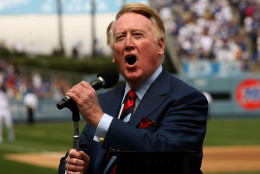 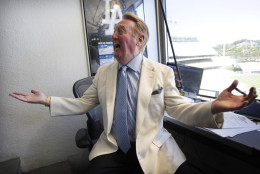 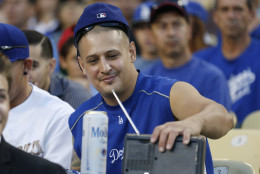 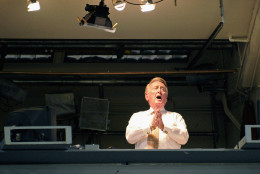 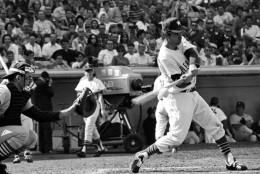 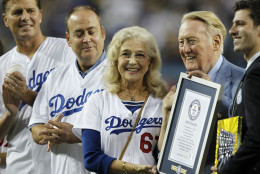 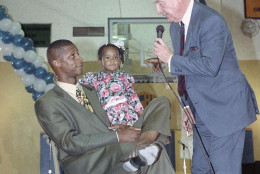 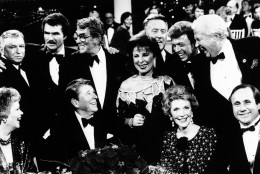 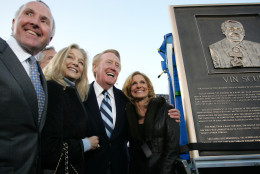 Editor’s Note: This story was originally written in October 2015. Scully hangs up his broadcaster’s hat Sunday after 67 years with the Dodgers, but it was WTOP that gave him his big break in 1949.

download audio
Vin Scully spoke to WTOP about how he got his start in radio here in D.C. (Andrew Mollenbeck, WTOP)

LOS ANGELES — In Southern California, he’s called the “Soundtrack of Summer,” in part because most people have never lived a summer without Vin Scully behind the microphone.

For the last 66 years, Scully has been the voice of the Dodgers, first in Brooklyn and then in Los Angeles. But the team will have to carry on without its cherished announcer this postseason.

Scully, who will be 88 in November, was hospitalized Thursday and told by doctors to stay home during the playoffs in order to rest.

WTOP spoke with the legend recently about his long career.

His baritone voice and welcoming, congenial delivery has become familiar across the country. Scully has called 25 World Series, National Football League games, golf tournaments (including the Masters) and even some tennis.

His storied career earned him a spot in the broadcast side of baseball’s Hall of Fame — 33 years ago.

Unexpectedly, to him anyway, that unparalleled career began with an offer to work at WTOP.

“I was shocked because it was actually the one station I was not going to send a letter to,” Scully told WTOP before a recent game at Dodger Stadium.

“It’ll only cost you another 3-cent stamp,” the lady typing his letters told him.

Long shot as it may have seemed to the then-college student, he heard back from the station, with a request that he show up in person.

He went in to audition, and a couple days later he was offered a job.

Scully started at WTOP in May of 1949, a month before he would finish school at Fordham University in New York.

He had to miss some work to go back to take his exams.

He was a pinch hitter of sorts at WTOP, filling shifts for various full-time staff on vacation.

download audio
In his own words: Working at WTOP (Vin Scully)

The one job he never got was covering for the two men who were the presidential announcers. As Scully remembers it, one was always at the ready to introduce the president.

Like so many young, poor Washingtonians after him, Scully caught a break at an hors d’oeuvres party.

At the time, he lived in an “animal house,” sleeping on a couch in a heavy coat. But shortly after arriving, he went to a British Embassy party.

While there, he met a woman who was headed back across the pond to marry a man in the Royal Air Force.

She was looking for a house sitter.

download audio
In his own words: Living in Georgetown (Vin Scully)

So he moved into the home at 29th and O streets in Georgetown, right across from Secretary of State Dean Acheson.

“That was a high-rent district for a kid right out of college,” he says.

Before leaving WTOP, he wanted to thank the staff. So he invited them to the three-story federal home he was watching.

“When the car would pull up with members of the staff, they were totally shocked,” he says, chuckling. “I got away with that once, anyway.”

He spent only a few months with the station. The next year he was hired by the Dodgers, where he worked in the booth along side Red Barber and Connie Desmond.

download audio
In his own words: Bryce Harper having to shave his beard (Vin Scully)