Home » Sports » How to place your…

How to place your bets for the 141st Kentucky Derby

WASHINGTON — On arguably the biggest sports day of 2015, Triple Crown season will commence this Saturday in the 141st running of the Kentucky Derby. It was just a year ago that California Chrome captured America’s heart, overcoming a mediocre pedigree to capture both the Derby and the Preakness Stakes before falling short just like Smarty Jones, Big Brown and War Emblem have before him in the Belmont Stakes.

This year’s field could be one of the best in the last 25 years. Could this be the year the Triple Crown-less streak is finally broken?

Here’s how I see it playing out at Churchill Downs (Spoiler Alert: I do not believe the favorite, #18 American Pharoah, will finish in the Top 3)

There’s so much to like from of the winner of the Blue Grass Stakes on April 4. Did I mention he also won the Tampa Bay Derby by five lengths on March 7? These wins are significant because they occurred in Kentucky Derby prep races, which also include the Louisiana Derby, Wood Memorial, Florida Derby and Santa Anita Derby.

Earlier, I mentioned about California’s Chrome’s bloodline. If only he had the pedigree of Carpe Diem we could have been talking about potential back to back Triple Crown winners. Diem’s brothers and sisters have won graded stakes races at a higher rate than anyone else.

Of the three horses Pletcher has in the Derby, Carpe Diem is the best and one of the best closers in the field. He’ll be ridden by a Hall of Famer in John Velazquez. With the right trainer and the ability to handle the 1 ¼ mile distance, the chestnut colt will win on Saturday.

Dortmund’s Dad is Big Brown, who fell short of his Triple Crown bid back in 2008. What’s frightening for those in the rest of the field at Churchill Downs is that Dortmund is probably better than his Dad was during his historic run seven years ago. Dortmund hasn’t lost in all of his six starts, and he dominated the competition at the Santa Anita Derby winning the $1 million purse by 4 ¼ lengths.

Dortmund can beat you two ways: either with his brilliant speed or coming off the pace. Along with Todd Pletcher, Bob Baffert is another legendary trainer in the sport and will have Dortmund ready for the moment. He’ll battle Carpe Diem until the very end in what will be an exciting finish, with Dortmund suffering his first loss of his running career.

His 2nd place finish in the Wood Memorial was huge, as the only race the bay colt has actually won was back in January at Aqueduct. He’s an improving horse who has long strides that can help him stay with the frontrunners, as long as he doesn’t stumble out the gate.

How to Place Your Bets if you have $40 handy: 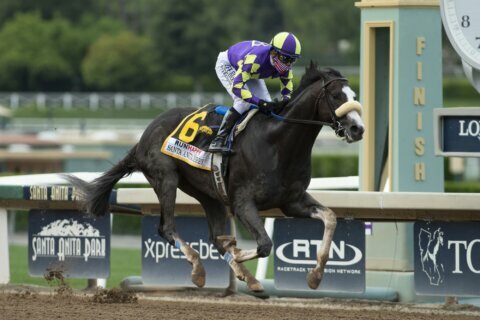