Coronavirus News: Fairfax Co. votes to increase substitute teacher pay | Is it time to get a COVID-19 booster? Which one? | Local cases of COVID-19 | How many in DC region are vaccinated?
Home » Sports Columns » Michael Jordan's teammate Bill…

Michael Jordan’s teammate Bill Wennington: ‘He would be on top at the end’

“If Michael was involved, you were competing, and competing at 100%, and he expected that,” said Bill Wennington, the former Bulls center, ahead of the next installment of "The Last Dance" documentary.
Listen now to WTOP News WTOP.com | Alexa | Google Home | WTOP App | 103.5 FM

When Michael Jordan played, it was must-see TV, and even now, 20 years removed from his glory days with the Chicago Bulls, we are still watching.

The Netflix docuseries “The Last Dance” that has aired the last three Sunday nights on ESPN takes us on a journey through Jordan’s final season with the Bulls in 1998. Jordan retired for the second time after that season before later returning to the NBA in 2000, first as president of the Washington Wizards, and then from 2001-2003 as a player for the Wizards.

“The Last Dance” has been a smash success in the ratings, captivating millions of viewers. In addition, “The Last Dance” has also triggered lots of discussion and social media activity, and been the number one trending topic on Twitter during its time slot.

It was Bulls head coach Phil Jackson who called the Bulls 97-98 season, ‘the last dance.” With Jordan back from his brief first retirement, the Bulls had won the last two NBA titles. Before the season, Jackson was told it would be his last, regardless of how the team performed.

Facing salary cap issues on a team that included Jordan, Scottie Pippen, and Dennis Rodman, the Bulls front office believed it was time to move on. Center Bill Wennington, who now serves as the color analyst on radio with the Bulls, was an important role player on that team, and he remembers the melancholy feeling at the start of the season, but understood why Jackson called it the “the last dance”

“Phil was very cerebral and knew how to keep everyone on the same page,” Wennington said. “It was a perfect scenario to come up with, [calling the season ‘the last dance’], because he was able to gather us and get us to focus on the task at hand. But he also wanted us to look around and pay attention to what was happening, because he knew it was special.”

As head coach, Jackson orchestrated a successful end to the 97-98 season, or what he called “the last dance.” The Bulls won their third straight NBA title and sixth overall. Jordan went into retirement, for the second time, on top. He was the MVP of the NBA Finals, and for the fifth and final time in his career, Jordan was MVP for the regular season.

Jordan is arguably the greatest basketball player ever. That statement will trigger a heated debate with some saying LeBron James is the greatest, or older fans will suggest Wilt Chamberlain was the best. What cannot be disputed is Jordan’s attention to detail and incredible work ethic that led to his greatness.

“At St. John’s, I was fortunate enough to play with another great player, Chris Mullins,” Wennington said. “Chris was one of the original gym rats. He was in the gym all the time and because I wanted to keep up, I ended up practicing all the time. That helped me because when I played with Michael I discovered he takes being a gym rat to a whole different level.”

It is also hard not to believe that Jordan was the most competitive basketball player ever. He was only 6-6, yet he became known as “Air Jordan,” and flew through air with 360-degree spin moves, and jaw-dropping slam dunks. The desire to be better and compete flowed through Jordan like oxygen.

“He wants to win everything and anything he’s doing, from something as trivial as who could take the least amount of steps from half court to the baseline, to who could make a half-court shot, to obviously winning basketball games, playing cards, golf, whatever, you name it,” Wennington said.

“If Michael was involved, you were competing, and competing at 100%, and he expected that,” Wennington continued. “And if you were fortunate enough at any time to beat him, it wasn’t over until he beat you again. Now it might take a couple of days if you’re really good at something, but he was going to come back and challenge you and get that victory back to where he would be on top at the end.”

As much as Jordan wanted to win individual competitions, basketball is a team sport. To be sure, there were times, maybe even a lot of times, when the number one play for the Bulls was “get the ball to Jordan and get out of the way.” It sounds simple and was effective, but was not always that way.

“He knew he couldn’t win the championship unless all 12 guys on the roster did their job and competed 100% every single day, so he was going to push you,” Wennington said. “And if he thought you weren’t competing at the highest level, he was going to let you know about it and it wasn’t easy. He was brutally honest. There were some guys he really had to push to try to motivate them to understand that they had to be at the top level all the time if we were going to win.”

Over last three Sunday nights, ESPN has offered up six of the 10 episodes in the docuseries. There are two more weeks to go of viewing on cable and on-demand, and then “The Last Dance” will be available on Netflix. Wennignton is glad his old teammate is being showcased, not just for something to watch, but as reminder and to offer some perspective to younger fans who might not have seen Jordan play live.

“For young people that are the naysayers and get offended when someone said Michael Jordan is better than LeBron James and want to punch your lights out or cuss you out on Twitter and social media,” Wennington said. “This is a way for them to see a little bit more film, and see just how competitive Michael was and how good he really was. And why there’s so many people from my generation, that understand and know why Michael is the best there ever was.” 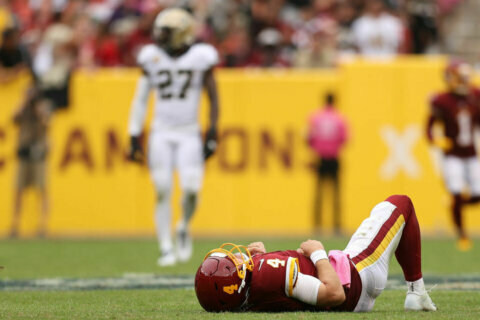