HR Derby belonged to Bryce, but All-Star Game was Max’s

Bryce Harper made the Home Run Derby his event. But Tuesday night's All-Star Game was Max Scherzer's moment, and may have signaled a changing of the guard for the face of the Washington Nationals franchise.

By going last in every round, Harper was given the best spot to succeed — and he didn’t disappoint. He delivered victories over division rival Freddie Freeman, upstart Max Muncy and fellow lefty slugger Kyle Schwarber. Down big late in the finals, Harper reached down and summoned a fire that thrilled the crowd, a sight Nationals fans haven’t seen nearly enough of this year.

If Harper stays in Washington long-term, the narrative will be written that this moment of glory turned the tide for him, never mind his quiet, 0-for-2 performance in the All-Star Game itself, striking out in both at-bats. But Tuesday night, the biggest cheers came for the only player summoned by name from the crowd — Max Scherzer.

Scherzer came out of the gate with his hair on fire like he always does, but maybe even more so. Regularly hitting 98 on the radar gun, he struck out Mookie Betts to open the game, then blew away Jose Altuve on three pitches. As he reached two strikes on Mike Trout, the best player in the world, the Nationals Park crowd rose to its feet and chanted: “Let’s go Max!”

Just after Opening Day of 2015, when it was first announced that the All-Star Game game would be coming to D.C. this summer, Harper was clearly seen as its showcase star. He established himself as a threat to Trout that season for the mantle of top player in baseball, mashing 42 home runs and unanimously winning the NL MVP. He announced he’d return to the Home Run Derby when it came to Washington, after skipping it the past couple years. The stage was already set.

Then, something funny happened. While Harper’s continued to make every All-Star Team in the interim, Scherzer has done the same, while also winning each of the last two NL Cy Young Awards and positioning himself to possibly make it three straight. He leads the league in wins, innings pitched, strikeouts, WHIP and strikeout rate as baseball heads into the second half. And with the honor of actually starting the Midsummer Classic for the NL, he was the one who took the ball first, who stood atop the mound and controlled the action for the nation to see.

“It’s really cool,” Scherzer said of the chance to start the game. “You know, I’ve gotten to do this two other times — it’s unbelievable that I’m getting a third chance at this.”

But this one was different. It was at home. Mets hurler Jacob deGrom had put up comparable first-half numbers, staking himself as the other candidate to get the ball first. While Scherzer was undoubtedly aware of that, he refused to entertain any thoughts over his last few starts about what impact they might have on his All-Star status.

“If you start going down that path of playing, ‘Oh, I gotta pitch well so I can start the (All-Star Game),’ it just makes your mind go numb. You just start spiraling into circles and you start thinking about different things that you really shouldn’t be thinking about,” he said.

Clayton Kershaw held the mantle as the best pitcher in the National League for much of the past decade, winning the Cy Young three times and finishing in the top five every year since 2011. But Scherzer’s emergence, as well as his remarkable durability, have perhaps finally boosted him level — or even above — the Los Angeles lefty in the eyes of fans around the game, a place he already was with players.

“I think so. I was unaware that he was not, you know, right up next to Clayton Kershaw,” said Nats closer Sean Doolittle. “I kind of thought he was. The respect Max has around the league as one of the best pitchers in baseball right now.”

Since coming to the Nats in 2015, Scherzer has pitched 160 more innings than Kershaw, racking up five more wins above replacement (25.2 to 20.2), per Baseball Reference. He’s also struck out 257 more batters over that span.

“You look at where he is on the all-time strikeout list, no offense, I had no idea Max was that good,” said Doolittle. “Goodness gracious.”

Tuesday night was Scherzer’s first chance to pitch again with the eyes of the baseball-watching nation upon him since last year’s bizarro-world NLDS Game 5. This time, spiking 98 miles-per-hour on the radar gun, whipping the crowd into a frenzy.

With Harper’s long-term future still undecided, Scherzer very well may be the face of this franchise moving forward. Based on the reactions at Nats Park Tuesday night, the fans seemed just fine with that. 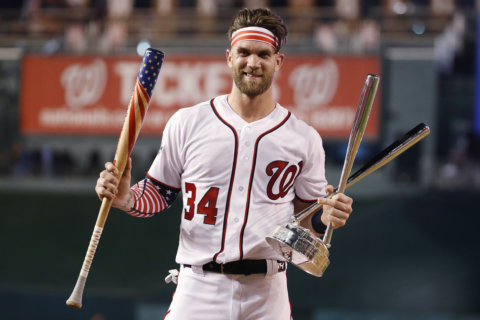 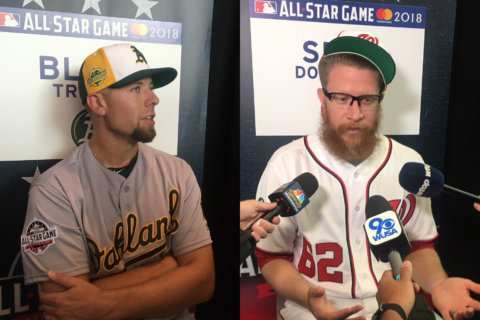 After trade, Doolittle, Treinen reunite in DC as All-Stars