In Denmark, a soccer home game is a Zoom meeting unlike any other

After a suspension of over two months because of virus concerns, the Danish soccer league resumed Thursday. As is the case in many places, stadiums in Denmark are closed to supporters. However, that limitation opened the way for AGF to be innovative to include fans in its match-day experience.

An AGF home game is a Zoom meeting like no other. AGF partnered with the video conferencing company that has become popular during the pandemic, and over 500 Zoom meetings were created.

The meetings were then displayed on a 131-foot long and 9-foot high video board along the sideline of its stadium, Ceres Park.

“I must say it was quite successful and sometimes moving to see how fans reacted,” said Soren Carlsen, AGF’s media officer after their 1-1 draw with rival Randers FC on Thursday. “We came directly home to them in their living rooms, in the kid’s rooms, and we were able see how happy they were when we scored.”

Past the 90th minute, AGF scored in second-half stoppage time to rescue a 1-1 draw, and images of jubilant AGF fans, most decked out in club colors or wearing team scarves in the Zoom meeting rooms, splashed across the video board. In a control room, a director alternated between big shots of one group of supporters and glimpses of the entire collection of fans.

“When the game ended, I looked up and saw some of the fans chanting about our last goal of the game,” said Carlsen. “I saw an elderly couple, and the husband was sitting down and his wife stood over him and kissed him. You could see and feel the emotion.”

Inside AGF’s stadium, not only could passion for the game be felt, but it also could be heard. Leagues around the world playing without fans have debated the use of recorded crowd noise to add atmosphere to their games.

AGF, though, was creative and decided to use a mixture of recorded sounds from previous games and the noise fans made attending the game through a Zoom meeting.

“That was the biggest challenge, because you can imagine you have 10,000 Zoom participants in a meeting and they all turn up their microphones, it would just be white noise,” said Carlsen. “But we had the ability to focus on one group at a time, so for example, we could have 200 people singing at the same time. The ability to mix the sound allowed us to include our fans.”

Fans have to watch the game on a screen or a television, but they have the opportunity to choose where they sit and who they sit with. Tickets for a space in one of the Zoom meetings for an AGF game are free and reserved through the club’s website. There are meeting rooms for AGF supporters, neutral supporters, and even supporters of the visiting team.

Additionally, the AGF Zoom meetings for games are divided up similar to the sections in its stadium. In effect, that allows fans who are used to sitting together for matches in a live setting to still be together in AGF’s virtual grandstand. 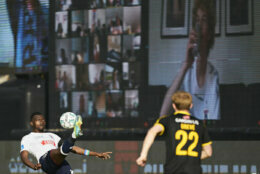 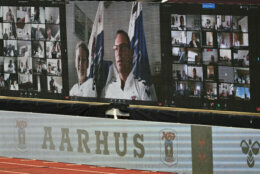 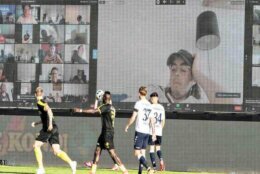 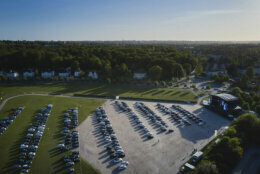 Carlsen believes it helps create the community feeling that exists at AGF matches and added to the overall positive response so far from the team’s fans.

“We even had one fan who gave up his season ticket reach out and say he wanted his season ticket renewed,” said Carlsen. “He said this is brilliant. Please take me back. Fans want to be together again and to use football to create a happy event and get people thinking about something else, it’s a great thing.”

Along with community motivation, there was a competitive motivation for AGF to find a way to involves its fans in its home matches. While AGF had to settle for a draw in its first game surrounded by a virtual grandstand, Carlsen said the team’s players had a positive reaction to being able to see and hear fans instead of empty seats and echoes of sound in a cavernous stadium.

In fact, before the Danish season was halted in March, AGF played a road match against Silkeborg without fans in the stands. AGF lost that match 2-1, and while the team’s coaches did not blame the absence of a crowd for the result, they noticed the unusual circumstances did impact the team’s play.

“They were nervous on how the players would react without spectators,” said Carlsen. “So the manager and sporting director came to us and said, ‘Guys, can you help create some sort of an atmosphere? We would like if you start thinking about sound, and so on.’ The result was the Zoom meetings.”

AGF has also partnered with the city of Aarhus to create a drive-in theater alternative for fans who don’t connect to their virtual grandstand. A big screen is set up in a park near the city, and fans in cars can park and watch the games.

Whether in cars or through computers, AGF is trying to make sure social distancing does not mean there is no social interaction.

And we use a modern technology that we all have come to know under these difficult times to create an atmosphere, and to recreate the community that they have been missing.”