Comet making first and likely only appearance in recorded history

The cosmos are already set to make human history in 2023. A bright green comet discovered less than a year ago has traveled billions of miles from its believed origins at the edge of our solar system and is in the process of making its only recorded appearance visible from Earth.

The comet, C/2022 E3 (ZTF), was first seen in March 2022 as it made its way through Jupiter’s orbit. According to NASA, it’s a long-period comet believed to come from the Oort Cloud, the most distant region of Earth’s solar system that’s “like a big, thick-walled bubble made of icy pieces of space debris” that can get even bigger than mountains. The inner edge of this region is thought to be between 2,000 and 5,000 astronomical units (AUs) from the sun — between 186 billion and 465 billion miles.

This means that C/2022 E3 (ZTF) has made a rare, once-in-a-lifetime journey to be close to Earth.

One recent comet of this type, C/2013 A1 Siding Spring, previously visited the inner solar system and went near Mars in 2014, but according to the space agency, it won’t return for about 740,000 years.

Jessica Lee, an astronomer with the Royal Observatory Greenwich, told Newsweek that the E3 comet could be a similar situation.

“We don’t have an estimate for the furthest it will get from the Earth yet — estimates vary — but if it does return it won’t be for at least 50,000 years,” she said. “…Some predictions suggest that the orbit of this comet is so eccentric it’s no longer in an orbit-so it’s not going to return at all and will just keep going.”

How to see it

The comet has been visible with a telescope for more than a month. Astrophotographer Dan Bartlett managed to capture an image of the comet in December from his backyard in California. He was able to see “intricate tail structure” in the comet’s plasma tail, he said, and “conditions are improving.” 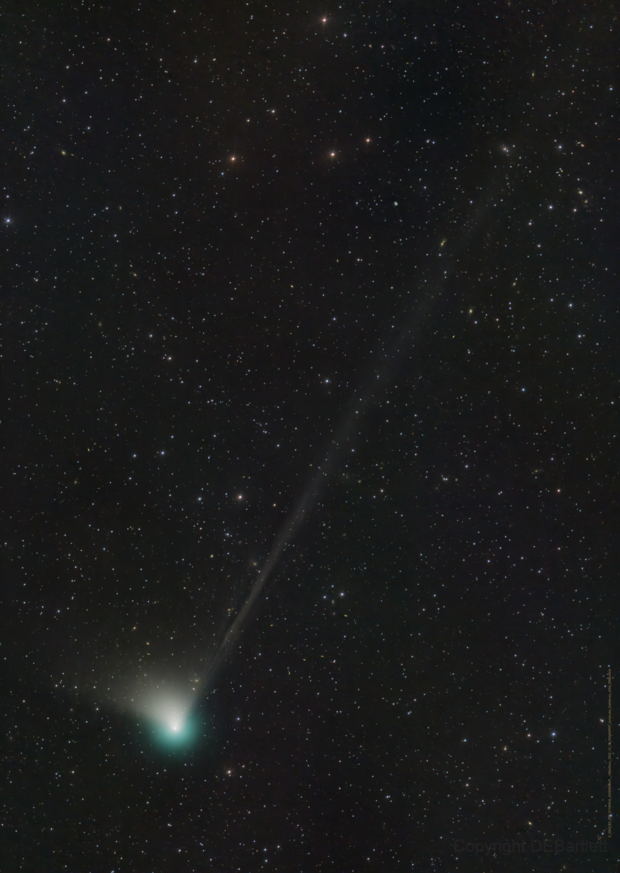 Dan Bartlett was able to capture a photo of the comet from his California home on December 19.

But the view will only get better as it gets closer to our planet. The recently discovered E3 comet, which has been seen with a bright greenish coma and “short broad” dust tail, made its closest approach to the sun on Jan. 12.

It’s already being seen across the U.S., with photographers capturing spectacular images of its bright streak across the night sky. According to Illinois’ Adler Planetarium, it will reach its brightest and most visible status from Earth between Jan. 31 and Feb. 8, with NASA saying it will make its closest approach to our planet on Feb. 2. 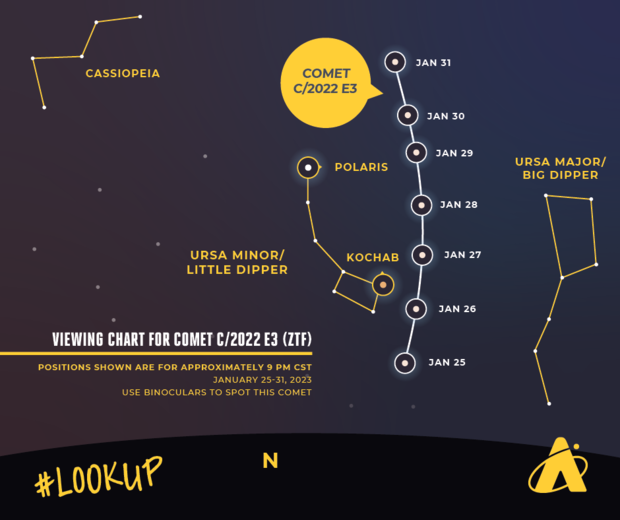 NASA said that it should be visible with the help of binoculars and as it gets closer to Earth, could even be visible to the naked eye away from city lights. If weather conditions aren’t up to par in your location, The Virtual Telescope Project will live stream its closest approach at 11 p.m. ET on Feb. 2.

“This comet isn’t expected to be quite the spectacle that Comet NEOWISE was back in 2020,” NASA said. “But it’s still an awesome opportunity to make a personal connection with an icy visitor from the distant outer solar system.”

Comet Neowise is passing Earth for the first time in almost 6,800 years

Look up: Green comet not seen since caveman days is swinging by Earth