More than 300 people from taking a Polar Plunge in the Potomac to raise money for the Special Olympics.
Listen now to WTOP News WTOP.com | Alexa | Google Home | WTOP App | 103.5 FM

It was sunny in Woodbridge, Virginia, Saturday, but it wasn’t exactly swimming weather.

The cold weather didn’t stop more than 300 people from taking a Polar Plunge in the Potomac River to raise money for the Special Olympics.

An ice cube, some frozen bananas and a self-described “Star Wars gang” were just some of the creative costumes to be found at the event.

“I’ve got two Princess Leias, I’ve got two Han Solos, I’ve got a Rey and I’ve got Chewbacca — my dog,” said David Wyttenbach, who was dressed up as Han Solo frozen in Carbonite.

“The true champions are the Special Olympians that are going to go compete at the games this coming summer and so anything we can do to help them get there and achieve their goals, we’re excited to help them with that cause,” he said.

The event outgrew the waterfront at a restaurant down the road and the plunge was held for the first time this year at Leesylvania State Park.
This year’s event raised $91,000 dollars for the Special Olympics.
“Today is beautiful,” said Rick Jeffery, President of Special Olympics Virginia. “It’s a nutty event with some fun costume contests and it’s a great way to support our athletes.”
More than $1.5 million was raised among the four Polar Plunges put on by Special Olympics Virginia this year.
(1/7) 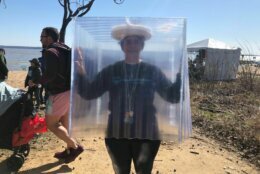 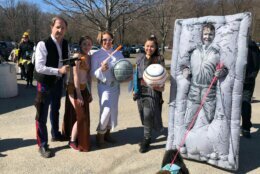 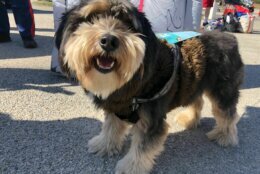 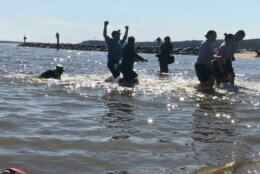 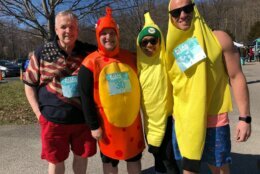 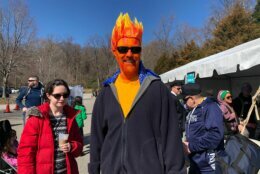 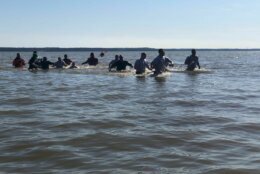 Share on Facebook. Share on Twitter. Share via email. Print.
Ellen Head, senior director of development for the organization said that it’s a great way to show off the programs and the mission of Special Olympics Virginia.
“Inclusion is the revolution. It’s the way that we are going. Differences should bring us together, they shouldn’t divide us,” Head said.
Patrick DeLapp, a Special Olympic coach, dressed up as a frozen banana for the plunge.
“The key thing for Special Olympics to run is getting fundraising dollars and this is just another way to raise awareness and get people out to see Special Olympians plunging while also fundraising.”