A woman is in critical condition after two of her dogs attacked her in Fort Washington, Maryland, Wednesday night.

The dogs were American Pit Bull Terriers, according to the Prince George’s County Animal Services Division.

Prince George’s County police received a call from a neighboring home, in the 11000 block of McKay Road. Neighbors reported hearing a female screaming inside the residence.

When police arrived on scene, they found the woman was severely injured due to the attack.

Responding officers fired their weapons after one of the dogs lunged at the officers. One of the dogs died, according to police. The other is in custody.

“The young lady who was attacked by the dogs was the owner of the dogs,” said Rodney Taylor, chief of the animal services division.

Adewole Ogundepo, a neighbor who lives right across the street from the attack, said he encountered the dogs earlier in the week and they seemed threatening and dangerous.

“These two dogs approached me and tried to charge me,” Ogundepo said. “I grabbed a stick and I fended them off.”

Ogundepo said he was so upset by the incident that he went to the owner’s home and told her that she needed to keep the dogs on a leash.

According to Taylor, the dog that was taken into custody initially ran away from the scene, prompting a search of the area. It later returned to the scene on its own.

“My officer was able to pick the dog up and bring it in without any trouble,” Taylor said. “It does not seem to be vicious at this time.”

There was a third dog that was also removed from the home, but it was a puppy and was not involved in the attack. 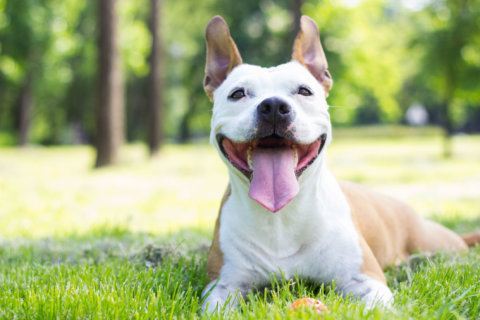