In Maryland, Prince George’s County leaders on Wednesday highlighted their efforts to preserve housing for working men and women who are unable to pay the region’s sky-high rents.

Developers might covet the close-in property named The Villas at Langley, not far from University Boulevard and Riggs Road, but the county’s affordable housing program is ensuring that rents for nearly 300 of the homes will be kept at 60% of area median income for residents of moderate means.

“We want to make sure that even in these areas that have developed and become very valuable, that we are still able to house people here at affordable rates,” Alsobrooks said.

“I’ve been here my whole life, and I hear so often from residents that they would love to see us grow, they just don’t want to leave anybody behind. I promised them that we would not leave anyone behind, and this is an effort to make sure that we deliver on that promise,” she said.

Jurisdictions throughout the region are working on plans to boost the availability of affordable housing. One of the goals is to ensure that working families are not unreasonably priced out of homes near where they work.

“If they are within 30 minutes of their job because of transit and because of proximity, then their quality of life for their children and the future generation will be more prosperous,” said Jair Lynch, the owner and manager of the property. 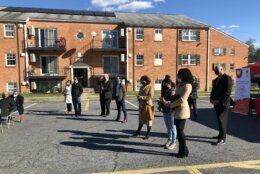 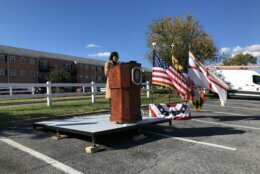 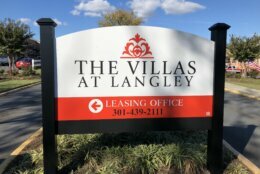 Alsobrooks said it is imperative that Prince George’s County preserves affordable housing, particularly because the county has consistently led the state in job growth in recent years.

The county’s program aims to ensure the presence of affordable housing, such as the Villa, which is near transit hubs, such as Metro and the Purple Line.

“We are looking to, by 2030, build 26,000 new housing units in the county, 75% of which would be affordable,” said Angie Rodgers, the deputy chief administrative officer for Economic Development at Prince George’s County.

Rodgers said the county’s “right of first refusal” is a very important tool in its effort to build the supply of affordable housing.

“It’s a county law that says that if an owner of a building that is 20 units or more decides to sell, that they have to offer that rate to buy first to the county,” Rodgers said.

The county’s developer-partners are on standby, ready to purchase the properties, which present opportunity to preserve affordable housing.

A Hyattsville apartment complex called Hamilton Manor is the first property in the county, obtained this past summer, through the new Right of First Refusal law.