Hundreds of residents of the largest apartment complex in the region — and one of the largest on the East Coast — are going to get extra help from Prince George's County, Maryland, this week to keep from being evicted.
Listen now to WTOP News WTOP.com | Alexa | Google Home | WTOP App | 103.5 FM
(1/4) 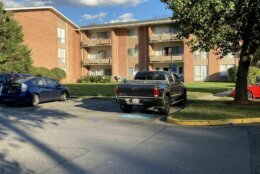 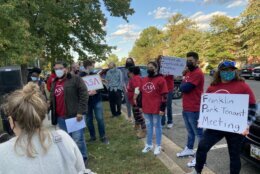 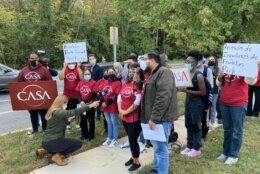 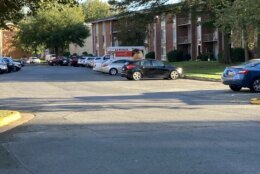 Hundreds of residents of the largest apartment complex in the region — and one of the largest on the East Coast — are going to get extra help from Prince George’s County, Maryland, this week to keep from being evicted.

The immigrant advocacy organization CASA gathered approximately dozen activists and tenants at the nearly 2,900-unit Franklin Park at Greenbelt Station complex Monday night to demand that the landlord — Fieldstone Properties — work with tenants to help them from being evicted.

CASA claims the management of the complex has refused to help many renters, including “not offering payment plan agreements that would allow tenants to pay back rent and prevent their eviction.” CASA claims many residents on the eviction list have lived in Franklin Park for a decade.

Many members of the immigrant and minority communities live in the complex of garden units. Built in 1964, and showing their age, the three-story buildings have units that the Washington Business Journal said range in size from 829 to 1,533 square feet, with rents of between $1,291 and $2,227.

CASA claims the owners of the complex have obtained more than 180 writs of evictions and have already carried out at least 11 of them. The organization told WTOP that as many as 400 to 500 people, including children, would be homeless if sheriff’s deputies execute all of the outstanding writs. It’s demanding that the apartment complex agree in writing not to carry out any more evictions. CASA claims apartment employees have been pressuring tenants to pay their back rent or be evicted.

At the protest, Prince George’s County director of community relations Euniesha Davis announced that county employees would be on site on Tuesday and Wednesday beginning at 10 a.m. on the second floor of 9230 Spring Hill Terrace to help people apply for rental assistance. She said those who are in danger of being evicted would have their applications fast-tracked.

Davis also said anyone who has already applied for rent assistance and wants to know the status of the application can call 301-883-6504, Monday through Friday. She said the county has hired additional staff to answer calls from the thousands of people who have asked for rental assistance.

WTOP witnessed five apartment employees monitoring the protest. They confirmed to WTOP that some renters had been evicted recently, but claimed those tenants had not applied for rental assistance and were many months behind on their rent. They said they would work with the county to keep people in their apartments and the complex was allowing the county to hold a renter-assistance fair at the property.

In a written statement handed to WTOP after the protest, apartment managers said they had emailed, called and visited tenants to tell them about the help that’s available.

The statement said Franklin Park had communicated with multiple organizations and city, county and state officials to “defuse the narrative that (we plan) to evict hundreds of residents in a week … We have no plans to evict … residents within the next week, month or remainder of the year.” 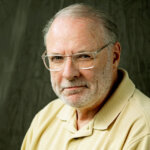