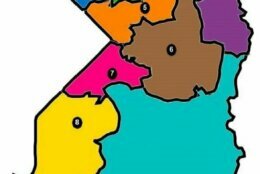 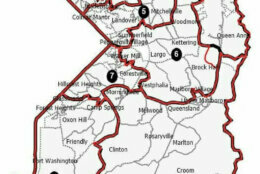 The Prince George’s County Council on Tuesday approved minor changes to a controversial council redistricting proposal, a move that sets up a high-stakes public hearing and vote in mid-November.

The changes were approved 6-4. The vote mirrored one taken last week, when the Council — meeting as the Committee of the Whole — introduced and advanced a proposal that differed substantially from the map created by an independent commission.

The proposal that a slim majority — led by Derrick Leon Davis (D-District 6) — crafted in private has sparked an outcry from civic organizations and office-seekers who had begun campaigns.

Although the changes approved on Tuesday were cast as a “compromise,” none of the councilmembers who opposed Davis’s proposal last week supported them.

One of Tuesday’s alterations reunited in District 3 the University of Maryland College Park with the school’s “Discovery District,” a nearby research and innovation hub. That change came in response to the university’s “strong desire” for the two sites not to be split, said Franklin, the sponsor of the amendment.

South Laurel moves back to District 1, where it is now. The City of Greenbelt is restored to District 4, its current home. There are other tweaks as well.

But Tuesday’s vote did little to quell the uproar among some civic activists in Prince George’s.

Many are unhappy that communities that have worked together in the past would end up in different districts if the Davis map is approved next month.

In addition, several community activists who had begun council campaigns in advance of the June 2022 primary would find themselves in new districts.

Critics point especially to the unusual shape of the re-fashioned District 1, which narrows inexplicably to gobble up the Calvert Hills community. Calvert Hills is home to former Councilmember Eric Olson (D), who told Maryland Matters he has been campaigning door-to-door for the District 3 seat for months.

If the Davis plan is adopted, Olson, who is white, will end up in the same district as Dernoga, the only white member of the current council.

College Park City Councilmember John Rigg said the Davis plan is “very clearly intended to stop” Olson, his neighbor, from getting back on the County Council.

“You see this little strip of land that extends down into District 3 to specifically grab the neighborhoods of southern College Park,” Rigg said. “If this were approved, you would have an extremely gerrymandered District 1 that extends from the Howard County line to within three-and-a-half miles from the state line with the District of Columbia.”

“It’s even more absurd than the last version,” he added.

Councilmember Dannielle M. Glaros (D-District 3), who served on Olson’s staff, said it’s “clear and obvious… that there is a concerted effort to control how this district functions and who our residents have an opportunity to vote on.”

“And that is deeply disappointing to me, as someone who calls these residents my family,” she added, her voice cracking.

The Davis plan would also appear to protect two other incumbents from stiff primary challenges.

Community activist Tamara Davis Brown (D), who lost to Harrison by 55 votes in 2018, would be moved out of District 9, preventing a rematch.

And progressive activist Krystal Oriadha (D), who finished 31 votes behind Streeter three years ago, would be denied a rematch because she would end up in District 5.

“We… know that the goal is to remove any possible challengers that these [current] members don’t like,” said Ivey during Tuesday’s discussion. “So I urge our residents to continue to reach out to their councilmembers, including the at-large members, and express your views.”

In an interview, Franklin denied there was any motivation to alter next year’s races.

He, Davis and others have maintained that their goals were to unite Prince George’s County’s 27 municipalities into single districts and create a majority-Latino district.

“There was no other reason, no other concern,” Franklin said.

“No one is entitled to a seat,” added Davis. “You have to run for a seat.”

Citizens will have the opportunity to comment on the amended version of the Davis map at an online hearing on Nov. 16. A vote is expected immediately afterward.

Franklin, who said he has received nearly 500 emails on the issue, said that many residents are under the erroneous impression that the map produced by the three-person commission has been discarded.

“That is simply false,” he said. “We are following the process to the letter of the law … with actually more transparency that we did 10 years ago.”

If the council votes against the Davis proposal on Nov. 16, the commission map — which made only modest changes to the current boundaries — would automatically be adopted, Franklin noted. It would go into effect on Nov. 30, as outlined in the county charter.

The hearing is likely to be a marathon affair.

On Monday, approximately 130 people protested the Davis map outside College Park’s new City Hall. The rally was organized by Olson’s campaign, though the candidate did not attend.

Speaker after speaker accused the six councilmembers backing the alternate map of operating in secret and of breaking apart long-standing community coalitions.

“I have never been so shocked as to see what happened the other day,” said Kate Tsubata,” a 35-year resident of West Lanham Hills.