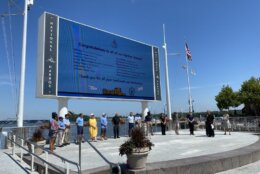 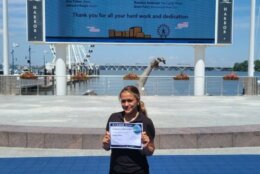 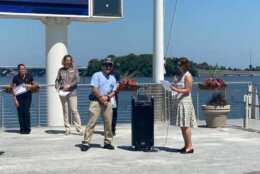 Fourteen employees of National Harbor-area businesses in Prince George’s County, Maryland, are $100 richer — in Harbor bucks, that is.

In a ceremony Tuesday, employees were recognized for their hard work during the pandemic. They were named “Harbor Heroes” and awarded $100 to spend at participating National Harbor establishments.

Will Mock, 36, who works as the general manager at Succotash, a restaurant serving Southern cuisine along the National Harbor, was one of the workers celebrated. A self-described “people person,” Mock said helping guests, providing jobs and developing his restaurant staff make his job worthwhile.

When the pandemic hit, Mock recalled that both his career and livelihood went into uncertainty.

“The first reaction was, I’m going to lose my job for an undetermined time, and it was scary for me and my family,” he said. “It was also scary because a lot of people that worked for me relied on this job to take care of their families. We just had no clue what was going to happen.”

Mock, who has worked at the National Harbor for over a decade and at Succotash for almost two years, said the company buckled down to do what was necessary to survive the economic downturn brought on by the pandemic.

“I have never known such dedication from a general manager,” Knight said. “He is down-to-earth and hardworking. Without Will, I am sure that failure may have come upon our operation.”

Mock said the restaurant’s success was a true team effort.

“Whatever had to be done, both Jamie and myself, we were ready to do what it took to keep our business running, the company that we loved going,” he said. “We did it for our team.”

“It wasn’t fun at all, but we had one mission, and that was to make sure we made it through.”

Mock said he plans to use the money to show restaurant staff his appreciation.

“That hundred dollars, I wouldn’t have earned it without the team that’s around me,” he said. “As a leader, if (I’m) not putting my team first, then it’s all going to fall apart.”