Prince George’s Co. rolls out strategy to deal with a ‘red flag’ in domestic violence cases 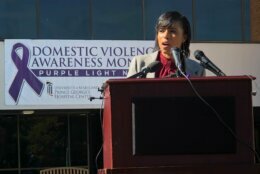 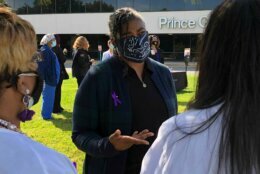 On Oct. 1, the first day of Domestic Violence Awareness Month, a new law in making strangulation a felony went into effect in Maryland.

“Maryland was one of a handful of states that didn’t recognize strangulation for the very lethal crime we know it to be,” Braveboy said. “Victims of strangulation can be rendered unconscious within seconds and die within minutes. It’s not like other second-degree or misdemeanor assaults.”

And Braveboy said there’s a new set of protocols in Prince George’s County for dealing with domestic violence cases where strangulation has been reported.

Melissa Hoppmeyer, chief of the Special Victims and Family Violence Unit in the Prince George’s County State’s Attorney’s Office, explained when a case of strangulation is reported — whether it comes through law enforcement or from doctors treating a patient — a team approach kicks into gear.

Just this Tuesday, she said, the county sheriff’s department responded to a 911 call involving strangulation in a domestic violence case.

“They began documenting the injuries of the victims,” she said, and then the sheriff’s department contacted the police department’s domestic violence unit. From that point, the victim was brought to the Prince George’s Hospital Center in Cheverly for a forensic exam, and prosecutors will take it from there.

Hoppmeyer said many of those steps took place before, but now, they happen in concert with each other.

“It’s not that victims weren’t able to get access to help — it’s that it wasn’t a coordinated response,” Hoppmeyer said.

Now, she said, “Everyone’s talking,” and “I think everyone’s a little bit safer because of this.”

Stella Hargrove, a survivor of domestic violence said on Wednesday that “My heart jumped for joy” when the tougher law on strangulation passed in Annapolis.

Standing at a podium at Wednesday’s announcement of the new protocols, Hargrove explained that she had to gather herself before speaking before the crowd of reporters and staffers on the grounds of the Prince George’s Hospital Center.

Pausing at times to take deep breaths and steady herself, she talked about her past experiences.

Hargrove said her ex-husband was “the perfect picture of a man. He would do anything for me.”

There were no signs, she said, that he was capable of the kind of violence she experienced at his hands.

One night, he became infuriated because the food he wanted to eat hadn’t been prepared.

“My husband put me against the wall, telling me what I did wrong. He put his hands around my neck and he strangled me.”

Hargrove explained she was lifted off the floor, her husband’s hands cutting off her ability to breathe. She lost consciousness.

“I don’t know how long he had his hands around my neck, but I can tell you when I woke up my clothes were soiled,” she said.

When she came to, she said he was sitting in a chair, looked at her and told her that “next time” she should make sure to prepare what he’d asked for.

Prosecutors and law enforcement officials say the numbers explain why strangulation should be taken seriously.

Prince George’s County Sheriff Melvin High said data shows that “strangulation is an enormous red flag when it comes to domestic violence” — an indicator of lethality.

County Executive Angela Alsobrooks, who previously served as state’s attorney, said research shows that “women who experience strangulation by their spouses or partners are seven times more likely to suffer an attempted homicide.”

Yet only 3% of those who experience strangulation may report it — or any form of domestic violence.

Hargrove explains that for a victim of domestic violence, packing up and leaving isn’t so easy.

When she was asked why she didn’t leave, she said she thought, “Where am I going to go that he’s not going to follow?”

At Prince George’s Hospital Center, medical teams are trained in examining the injuries associated with strangulation.

Sharon Rogers, the forensic nurse coordinator at the University of Maryland Capital Health, works at the Domestic Violence Sexual Assault Center. She operates the Cortex Flow, a forensic photography system.

“It shows injuries in finer definition,” allowing prosecutors to bring evidence to court to show the physical injuries a victim may have sustained.

“That can include bruising at the neck, but also other injuries associated with strangulation, like broken blood vessels in the eyes,” she said. “It helps the state’s attorneys make their cases.”

Rogers has been on the job treating survivors of domestic violence and sexual assault for 17 years.

She said the coronavirus pandemic has seen a dramatic jump in the number of domestic violence cases involving strangulation. In all of 2019, she said, she recorded six cases. So far in 2020, she’s seen 22.

While domestic violence may not be stopped by the new law, technology and protocols being employed, Rogers said she remains hopeful that increased public education can have an impact.

“With more public awareness, it will help,” she said.