Although the video has not been publicly released, Ross was able to view the footage and he said the police officers involved did everything they could have done to calm Shand down.
Listen now to WTOP News WTOP.com | Alexa | Google Home | WTOP App | 103.5 FM

Although the video has not been publicly released, Ross was able to view the footage. Initially, he said the police officers involved did everything they could have done to calm Shand down. However, he says after attending a community meeting and getting perspectives from others, there is more that can be learned and questions that need to be answered regarding the video.

The morning of Sept. 26, Hyattsville police found Shand in an area behind The Mall at Prince George’s after a coffee shop employee reported an armed person nearby. Police said Shand had attacked an employee at the same coffee shop earlier in the week.

When they arrived, officers found Shand with a pair of knives. Hyattsville police chief Amal Awad said her officers tried to get Shand to drop the weapons while walking with him for about a half-hour. She said they tried to de-escalate the situation, but eventually deployed a number of nonlethal options in an attempt to subdue Shand.

Three Taser attempts were not successful and eventually another officer arrived at the scene with a beanbag shotgun. That officer shot the beanbag gun a number of times and Shand still continued to behave threateningly.

“They talked to him, asked if he wanted cigarettes, they learned his name,” Ross said.
Awad explained that it was only when Shand went after the officer with the beanbag gun, who was not wearing body armor or his uniform, that other members of the police force shot and killed Shand.

“He advanced with his arms extended, with knives in either hand,” Awad said.

Ten police officers fired at Shand, and six of them were from the Hyattsville department. There were so many shots, bullet holes were found in a nearby dental office and an apartment building.

Since the shooting, county and Hyattsville police detailed all the nonlethal efforts they made before eventually firing on Shand. But at a community meeting Oct. 1, at University Christian Church, many residents wondered why the officers shot to kill.

“It seems like there was no consideration, it was just: start shooting. I want to find out if that was the case. Was people’s safety even thought about?” said Cindy Harding, of College Park, after the meeting last week.

One person at the meeting wondered why police didn’t try to contain Shand with a net or the sort of rope lariat a cowboy might use.

“Ten cops are shooting one person. They’re shooting like it’s Bonnie and Clyde out there,” said Patricia Welch, of Hyattsville.

Awad said if her officers find themselves in a situation like the one that arose with Shand, the goal is to get him to a medical facility for evaluation.

The county said it is conducting a homicide investigation and an internal review of the incident.
At the meeting, Awad said she hoped her community could be patient with the process. “I’m hopeful that it’s a process that we will be able to work through together,” she said.

EDITOR’S NOTE: A previous version of this story incorrectly stated when Ross spoke with WTOP. This story has been updated to reflect Ross’ change in perspective after speaking with the community. 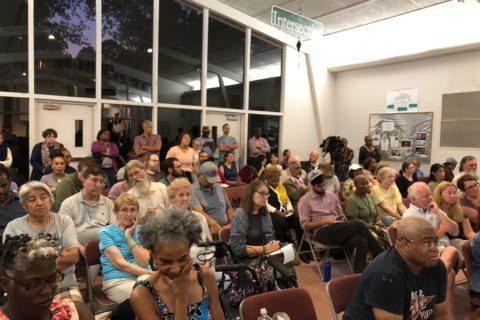 Man ‘armed with 2 knives’ tasered, then killed when he charged officers in Hyattsville: police