Police have identified the man who gunned down another man in an Oxon Hill, Maryland, liquor store as well as the Prince George's County officer who fatally shot the gunman. The officer is a 10-year veteran of the department.

WASHINGTON — Police have identified the man who gunned down another man in an Oxon Hill, Maryland, liquor store, as well as the Prince George’s County officer who fatally shot the gunman.

Prince George’s County police Cpl. Andrew McKenney, a 10-year veteran of the department, was stopped at red light in an unmarked police car several yards away from the store and ran toward the sound of gunshots. Police said Hall was still armed and fleeing the liquor store when he ran toward McKenney and ignored several shouted commands to stop before McKenney shot him.

Investigators said they found a gun next to Hall’s body.

The department’s internal affairs division is investigating the shooting as is the Prince George’s County state’s attorney, which is standard procedure.

The officer is on routine administrative leave during the investigation.

Police said they’re still investigating the motive for the liquor store shooting, but that Hall and Whitfield knew each other. Hall came into the store and opened fire shortly after Whitfield made a purchase, police said.

Police said there were about two dozen witnesses to that shooting, which was also partially captured on the liquor store’s surveillance video. 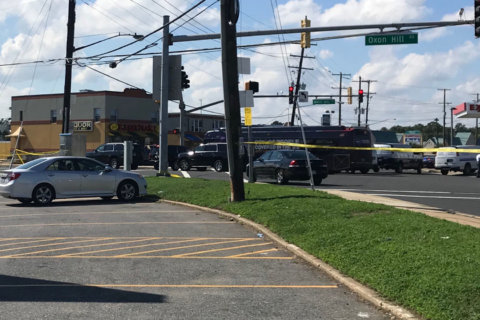