Police said a man stole an ambulance as he was being released from the Prince George's County Hospital Center Friday morning. They chased him for more than an hour before arresting him. There were no patients inside.
Listen now to WTOP News WTOP.com | Alexa | Google Home | WTOP App | 103.5 FM
(1/6) 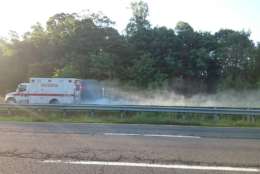 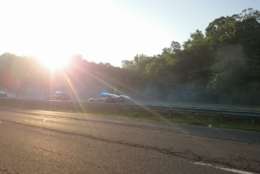 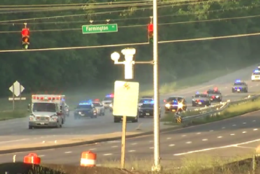 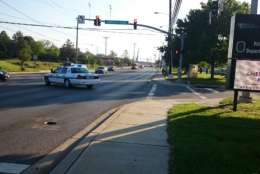 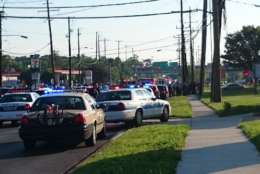 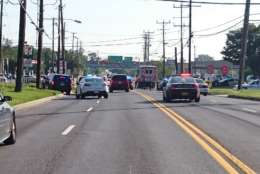 PRINCE GEORGE’S COUNTY, Md. — A Temple Hills, Maryland, man is facing charges after police say he stole an ambulance Friday morning and led police on a chase for about an hour and a half before he was arrested.

The Prince George’s County police said they had taken William Person, 43, to the hospital center overnight because they found him hurt and needing help. He was released at about 6 a.m. Friday, and allegedly took an empty ambulance when he left.

Police were able to find the ambulance within about 15 minutes thanks to a tracking device inside.

The driver led officers south in a slow-speed chase, heading down I-495 toward the Charles County line. Charles County sheriffs deputies put down spike strips, which popped two of the ambulance’s tires. Person allegedly turned around and headed back into Prince George’s County, with the ambulance smoking and shedding chunks of tire.

The ambulance turned onto suburban streets, heading toward Route 5.

Prince George’s County Police Chief Hank Stawinski said they wanted to keep the ambulance from getting onto the highway, so Maryland state troopers were able to box Person in, eventually bringing him to a stop.

There were no patients inside, officials said, and Person was arrested at about 7:30.

1 adult male suspect arrested by officers on scene. Suspect sustained what preliminarily appears to be no -life-threatening injuries. pic.twitter.com/89ag17EW7V

Stawinski said Person had a “thousand-yard stare” throughout the chase and was not responding to police.

Person was put into another ambulance and taken to a local hospital for minor injuries. No one else was hurt.

The Prince George’s County police said Friday afternoon that Person has been charged with auto theft and malicious destruction of property. They said Charles County would be charging him with traffic offenses as well.