A five-alarm fire that drew hundreds of firefighters to a construction site in College Park Monday prompted the largest fire response in the history of Prince George's County and caused an estimated $39 million in damage — the most significant the county has ever seen, officials said.
Listen now to WTOP News WTOP.com | Alexa | Google Home | WTOP App | 103.5 FM

COLLEGE PARK, Md. — A five-alarm fire that drew hundreds of firefighters to a construction site in College Park Monday prompted the largest fire response in the history of Prince George’s County and caused an estimated $39 million in damage — the most significant the county has ever seen, officials said. 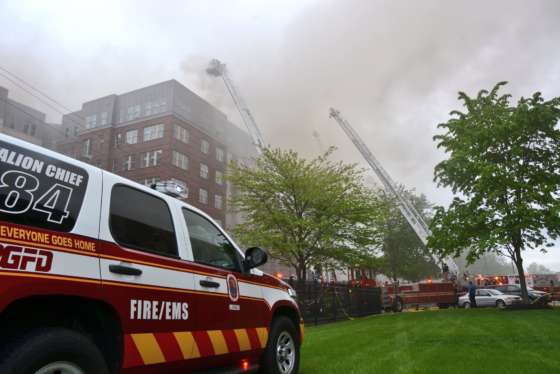 See photos of one of the largest fires in Prince George's County.

More than 200 firefighters and medics responded to the Fuse 47 apartment building, at 4700 Berwyn House Road, which had been under construction.

“The mutual aid response from our neighboring jurisdictions was much needed, appreciated and put to good use,” said the county’s acting fire chief Benjamin Barksdale.

Flames were reported at about 9:30 a.m., Barksdale said.  It was under control, with hot spots remaining, shortly before 3 p.m.

Part of the roof collapsed, and U.S. 1, between University Avenue and Paint Branch Parkway, was closed for much of the day.

One firefighter was taken to a hospital after experiencing fatigue, and another emergency worker was treated on the scene for an injured ankle.

Early Tuesday morning, the scene remained very active with crews using a ladder truck to pour water on the upper section of the seven-story structure.  The building was slated to have 250 apartments, retail stores and a parking garage and was scheduled for occupancy in July 2017.

In a Tweet just before midnight, the University of Maryland confirmed the campus would be back to normal Tuesday after shutting down Monday afternoon due to heavy smoke that billowed across Fraternity Row.  People sensitive to smoke, such as those with asthma, were advised to stay indoors, shut windows and turn off HVAC units.

The smoke prompted a nearby evacuation as well.

“Rainy weather caused the thick smoke to lay close to the ground and forced the relocation of 68 residents of the senior city building across the street,” said Brady.

Residents at the Gladys Spellman House spent the day at the College Park Community Center to avoid the smoke and went back to their building later in the evening.

One resident was taken to a hospital after she reported having difficulty breathing. 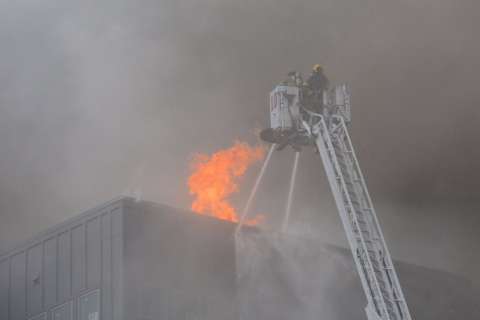