Holidays: Where to see holiday lights | Santa's back with inflation, inclusion on his mind | 4 ways to limit your holiday debt | Inflation 'definitely a guest' at holiday celebrations this year
Home » Prince George's County, MD News » Man struck, killed after…

Man struck, killed after getting out of his car on Md. roadway

A man who got out of his car following a minor crash was hit by another driver and killed Tuesday night in Prince George's County, Maryland, police said.
Listen now to WTOP News WTOP.com | Alexa | Google Home | WTOP App | 103.5 FM

WASHINGTON — A man who got out of his car following a minor crash was hit by another driver and killed Tuesday night in Prince George’s County, Maryland, police said.

At around 7:30 p.m. Tuesday, Maryland State Police responded to a crash on southbound U.S. Route 301 at Trade Zone Avenue in Upper Marlboro. A driver had been involved in a small crash there with two other vehicles and had gotten out of his car on the roadway to check the damage, state police said. While out of his car, he was struck by a fourth vehicle traveling southbound on Rt. 301.

The man who was hit was pronounced dead at the scene. He has been identified as Collin Elroy King, 79, of Beltsville, Maryland.

The cause of the crashes are still not known at this time, according to state police, and no charges have been filed.

The roadway was closed for several hours during the investigation. 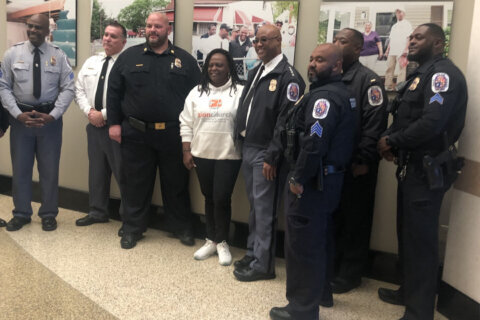