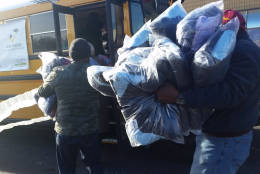 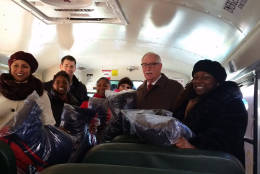 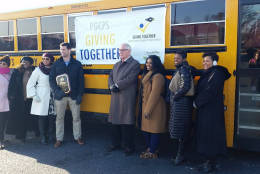 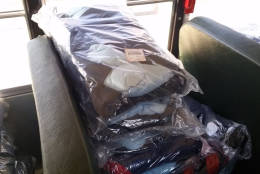 TEMPLE HILLS, Md. — Teens in the Prince George’s County won’t have to face another frigid day without a winter coat, thanks to a giving campaign by the county’s school system and a donation of more than 300 coats by a Temple Hills shopping mall.

The coats were collected Monday morning outside the front entrance to the Shops at Iverson mall, packed onto a school bus and will be delivered to teen students who are homeless or without a parent or guardian, the school system said.

Prince George’s County Public Schools CEO Kevin Maxwell said some students have had to wait for their school buses in the brutal cold without coats.

The coats were donated as part of the school system’s “Giving Together” campaign.

“When Prince George’s County Public Schools came to us about the ‘Giving Together’ campaign, we agreed that it was the perfect opportunity for us to help those less fortunate than we are during the holiday season,” Donavan said.

These students are some of school system’s most vulnerable students.

Natasha Jones with Prince George’s County Public Schools’ Homeless Education Office said the school system last year helped about 3,000 homeless students. She says a subgroup of this homeless population is the “unaccompanied homeless youth,” which are students that are not in the physical custody of a parent or of a guardian.

Jones said of that subgroup, there are 380 who are enrolled in the school system today.

Education is the key to preventing homelessness, Jones said. ” In school, students gain the skills and support needed to avoid poverty and homelessness as adults,” she said.