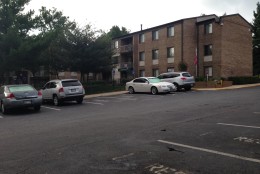 WASHINGTON — One security guard is dead and another wounded after a shooting at an apartment complex in Capitol Heights where they worked early Friday.

Prince George’s County police say that Adrian Kinard, 26, of Northeast D.C., was shot by his car, which was parked at the Central Gardens Apartments. He died later at the hospital.

Police have not released his name.

“It appears they were targeted,” Jordon said. “At the time of the shooting, the security guards were at their cars doing their paperwork.”

Surveillance video near the scene was being collected. And Jordan said a black Dodge Charger was seen leaving the scene.

Anyone with information is asked to call Crime Solvers at 1-866-411-TIPS. A $25,000 reward is being offered for information that leads to arrests and convictions.

2 security guards were shot around 1a in Capitol Heights. One dead. Cindy Lane closed for investigation pic.twitter.com/khqJHjZ86u