Virginia was expected to be a battleground state this presidential election cycle, but Hillary Clinton has held a solid lead in much of the polling -- until recently.
Listen now to WTOP News WTOP.com | Alexa | Google Home | WTOP App | 103.5 FM

Editor’s Note: This story was updated to include comments from Sen. Mark Warner (D-Va).

WASHINGTON — Virginia was expected to be a battleground state this presidential election cycle, but Hillary Clinton has held a double-digit lead in much of the polling — until recently.

A Roanoke College poll released Friday has Hillary Clinton with a seven-point lead over Donald Trump, a 45 to 38 percent split, which had a margin of error of plus or minus 3.8 points. She had a double-digit advantage in that poll just weeks ago.

Nine percent of the respondents said they were still undecided with less than a week until Election Day.

“As this latest set of leaks from the FBI has demonstrated, there is an audience out there still that is undecided and might turn against Hillary Clinton, or might be more willing to support Donald Trump, because of the most recent disclosures,” University of Mary Washington political science professor Stephen Farnsworth told WTOP.

“This anti-Clinton messaging that has been coming out of these FBI leaks is really more useful to those Never Trump voters, Republicans generally who have not been all that enthusiastic about Trump and were thinking about maybe voting for [independent candidate Evan] McMullin or a Libertarian,” Farnsworth said.

Virginia, significantly, is not an early voting state, unless you cast an absentee ballot. That means these tightening polls could actually mean Trump has a much stronger shot at winning the Old Dominion than other states that have already been accepting ballots.

“If you look around the country, there have already been 35 million votes cast in this presidential election, many of them cast before the latest round of FBI disclosures,” Farnsworth said. “For Virginia, where the vast majority of votes are cast on Election Day, you are looking at an environment where those last-minute issues, if they break for a candidate who is behind, could be pushing the state in a more competitive direction.”

Which is exactly what is happening for Trump, though he is still considerably behind in most of these polls.

Along with trying to woo the remaining undecideds, turnout will also be a major factor in the race.

The Clinton campaign is sending vice presidential candidate Tim Kaine to campaign in Northern Virginia on Monday, which has been interpreted by some observers as a sign Democrats are growing more concerned about their showing there.

“But I also know — having gone through an election cycle in 2014 in my own race, where things got a lot tighter at the end than anyone anticipated — the one thing in politics, especially in a year like 2016, is you don’t take anything for granted,” he said.

Normally, the presidential race would be the primary motivator to get voters to the polls, but a big congressional race in Northern Virginia may be the bigger motivator, especially for Republicans.

“The key issue that’s going to be motivating a lot of Northern Virginia voters is that question in Virginia’s [10th Congressional District] about who the next congresswoman will be,” said Farnsworth.

The political scientist explains that Marco Rubio saw a lot of support during the primaries in Northern Virginia and many of those voters have not been as supportive or excited to vote for Trump.  But with a tight congressional race between Barbara Comstock and LuAnn Bennett, local Republicans  may  be more energized to re-elect Comstock.

What that means for Trump might depend on the news cycle, but an increase in Republican turnout shouldn’t hurt him.  It’s the same argument for the Democrats.

“The Democrats will pick up big margins in Northern Virginia, and the question is how many voters will turn out,” Farnsworth explained.

The D.C. metro area is a major hub for Virginia Democrats, and poor turnout there could be bad news for the Clinton campaign.

So with the tightening polls, more money will be flooding the region.

“We’re probably going to see a bit more money spent in Virginia these last several days than we’ve seen these last few weeks,” Farnsworth said. “There’s going to be a lot of energy invested in turnout operations these next several days.”

Which means more campaign ads right up through Election Day. 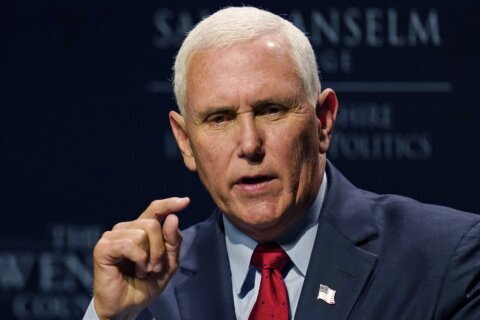