Arlington Pet of the Week: Meatball

This week’s Arlington Pet of the Week is Meatball, a mutt who’s showing his new owners “how to have a…

This week’s Arlington Pet of the Week is Meatball, a mutt who’s showing his new owners “how to have a dog.”

Here’s what owner Jayne had to say about her family’s first pooch:

Our family adopted Meatball (mutt, but maybe beagle mix?) from the Animal Welfare League of Arlington and brought him home on July 8. He had been rescued from West Virginia and fostered with his six brothers and sisters (all with meat names like Pork Chop, T-Bone and Snausage) at Woofs! training and boarding center.

My husband and I never had dogs growing up and often told people “we don’t know how to have a dog.” Our kids started asking for a puppy a couple of years ago, but we waited until they were older and less high-maintenance before we took the plunge. Meatball was only 8 weeks old when we brought him home. We read books, pamphlets, called Woofs and the AWLA, as well as our dog-owning friends for advice on training and housebreaking. We enrolled him in puppy kindergarten and regularly attend the puppy socials at Woofs in Ballston.

So far so good! Meatball has been a wonderful addition to our family. By day three he was allowed on the couch, even though I said I wouldn’t let him up there. He has yet to climb onto a bed, but I am guessing that is next. He loves to chew on things, including my 6-year-old son’s shorts (while he is wearing them), so we have a lot of pigs’ ears and chew toys lying around. He is mostly housetrained and will even bark when he needs to go out.

Speaking of barking, dinner time is really loud, as he wants to eat whatever we are eating instead of his own food. He has learned “sit” and will play fetch, but only with a Frisbee type toy. He can be naughty and will snatch my daughter’s favorite stuffed animals and go hide under a bed occasionally. He is pretty happy with his crate and will even go into it at night on his own to go to sleep. We have been trying to keep him up late to let him out and have plowed through almost five seasons of Breaking Bad to pass the time. Unfortunately, he still gets up at 5 a.m., weekends included, but we’ll keep him, and our kids are excited to have a new little “brother.”

Want your pet to be considered for the Arlington Pet of the Week? Email office@arlnow.com with a 2-3 paragraph bio and at least 3-4 horizontally-oriented photos of your pet.

Each week’s winner receives a sample of dog or cat treats from our sponsor, Becky’s Pet Care, along with $100 in Becky’s Bucks. Becky’s Pet Care, the winner of three Angie’s List Super Service Awards and the National Association of Professional Pet Sitters’ 2013 Business of the Year, provides professional dog walking and pet sitting services in Arlington and Northern Virginia. 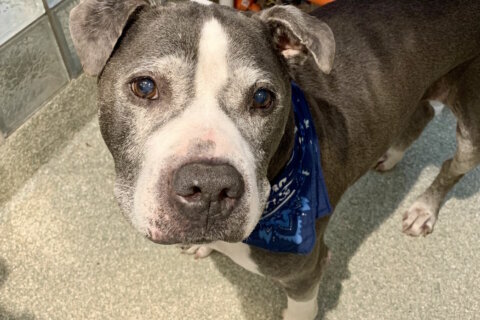 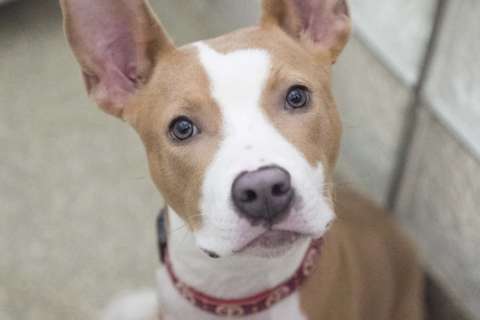 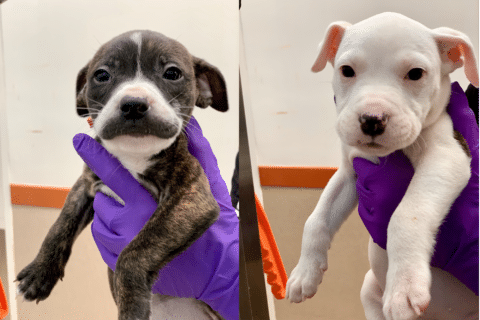