Felix comes out of retirement, helps 4×400 relay into final

She was needed back in Oregon for the prelims of the 4×400 women’s relay. Could she return to world championships?

The most decorated sprinter in U.S. history was on her way. She jumped on a plane and was on the track Saturday night for the “last” time to help the Americans advance to the final.

Back into retirement she goes. She said she will watch the final of the women’s 4×400 on Sunday from the seats.

That’s the plan — for now. She did have the fastest one-lap split of her teammates as the U.S. posted the fastest qualifying time of 3 minutes, 23.38 seconds.

“From what I know,” the 36-year-old Felix said of whether this is really the end. “But you know, what do I know?”

Last Friday, she went through an emotional send-off after helping the 4×400 mixed relay team to a bronze medal. That was supposed to be it.

She went back to Los Angeles for the ESPY Awards and was a few hot wings in when she was summoned to the track for an encore performance.

Talitha Diggs ran the opening leg for the U.S. before handing off to Felix. She powered around the track and gave the baton to Kaylin Whitney, the sprinter who grew up idolizing Felix. Jaide Stepter Baynes brought it home.

“It’s kind of coming full circle, literally,” Whitney said of taking the baton from Felix. “To be able to run alongside her, as well as these other great ladies, is always a privilege. I can’t be happier.”

Soon after her run, Felix crouched down by the scoreboard and then sat on the grass to watch. When it was over, she hugged her teammates.

“I was well on my way (to retirement),” said Felix, who had her Saysh spikes — a footwear company she launched — dangling from her shoulder. “I had no plans to be back here for the rest of the meet. But things happen. I felt good. It was really cool to run when the stadium was full and just get all the love, and run with this amazing group of women. It’s really set the team up to go after the title.”

The American contingent in the final figures to be 400-meter hurdle world champion Sydney McLaughlin, fresh off her world-record performance Friday, and Dalilah Muhammad, who won bronze in the race. They were on the winning 4×400 team at the Tokyo Games. So were Felix and Athing Mu. But Mu has the final of the 800 on the same day.

Any chance Felix may leave the seats to run again?

“I was asked to run in the prelim,” Felix said.

Should the group bring home a medal — the team is a big favorite — it would be Felix’s 20th medal at world championships, extending a record she already held. She also has 11 Olympic medals.

“It was just about being a team player and putting them in position to run their best (Sunday),” Felix said.

Her immediate plans revolve around one thing — more hot wings.

A LANE BY HERSELF

Belgian hurdler Anne Zagre will always have a cool story of how she ran all by herself in a heat at worlds. She will probably have the scars to prove it, too.

Zagre ran all alone in lane six because in a round one heat during the morning session, defending champion Nia Ali crashed into the 10th hurdle and impeded Zagre’s lane. The jury of appeal made the decision to have Zagre run in a substitute heat for a chance to advance. She hit the last hurdle and fell across the finish line. She had bandages on her left shoulder and hand, along with both knees.

“Such a pity that I touched the last hurdle and fell down,” Zagre said. “I have no words. I actually have mixed feelings. Just crazy.”

For Ali, her reign as world champion comes to an end. The 33-year-old mother of three hit the ninth hurdle while in the lead and fell into the 10th. She took the setback in stride.

“It’s part of my journey. I have to embrace every part of it,” Ali said. “I am not incredibly happy about it but I have to overcome it. I wanted to do my very best in front of the home crowd. I was prepared to show a fast time.”

There’s a gold medal going home with the family. Her partner, Andre De Grasse, ran the anchor leg to help Canada take gold over the favored Americans in the men’s 4×100.

Ayden Owens-Delerme of Puerto Rico has a 121-point lead over Canada’s Pierce Lepage after the first day of the decathlon.

“Day 1 was a successful journey,” Owens-Delerme said. “The decathlon is a battle of mind, not of body. Today, I felt like I conquered my mind and I was able to push my body to do things it’s never felt before.”

In triple jump, Pedro Pichardo, who left Cuba to compete for Portugal, added a gold medal to go with his Olympic title. Also competing was Cuba’s Lázaro Martínez, who was the final athlete on his team to compete in Eugene. Martinez fouled on all three of his jumps. … Anderson Peters of Grenada defended his world javelin title. He held off Olympic gold medalist Neeraj Chopra of India. 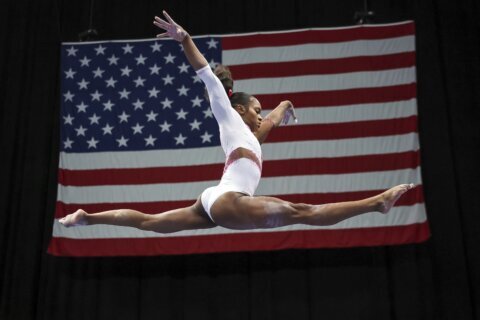 Shilese Jones sprints to lead at US gymnastics championships 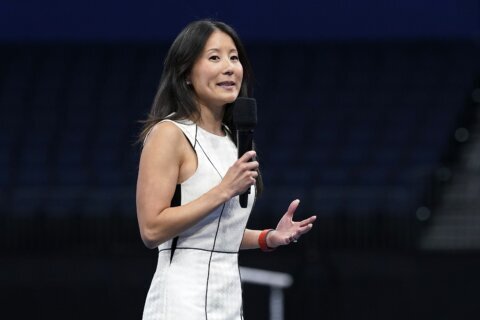