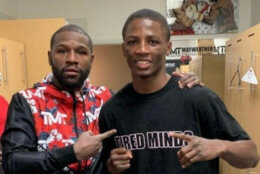 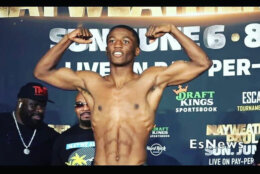 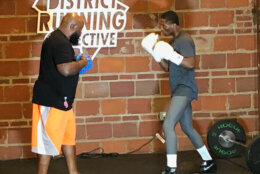 In the classroom D.C., native Jalil “The Major” Hackett knocked out schoolwork with a 3.5 GPA at Cardozo High School and now he is on a quest to knockout opponents in the boxing ring.

In his professional debut Sunday in Miami, Hackett, who just turned 18 on May 11, delivered on his promise to “put on a show.” Hackett knocked out Angelo Diaz only 61 seconds into the first round of their scheduled four round welterweight fight.

“I feel like I’m one of the most versatile younger fighters in the game right now,” said Hackett, who had 140 fights as an amateur boxer. “Not only was it amazing to fight on the same card as Floyd Mayweather, but to do it how I did it and get a first round knockout, you can’t draw it up any better”

Hackett was not looking to knockout Diaz in the first round.

Hackett was fighting on the undercard of the pay-per-view Floyd Mayweather-Logan Paul exhibition bout at Hard Rock Stadium, the home of the NFL’s Miami Dolphins.

It is not just that Hackett is on the same card with Mayweather, but in March, he signed a contract with Mayweather’s promotions company. Hackett caught the eye of Mayweather when he served as a sparring partner in 2019 before one of Gervonta Davis’ title fights.

“It makes me happy and has added to my confidence,” said Hackett when asked about Mayweather’s endorsement. “I was already confident, but it makes me more confident when one of arguably the best fighters to ever put on gloves believes in my ability is amazing.”

Hackett grew up in southeast D.C. and played several sports. He started boxing at the age of eight and it became his passion. Simply put, boxing was the sport Hackett liked the most and now it is his profession.

“To get to this point means a lot because I’ve been working hard and I’ve been grinding since I was eight years old,” said Hackett. “A lot of birthdays and holidays were spent in the gym when I missed time with family. To have it now pay off truly is a dream come true.”

All that time in the gym did allow Hackett more time with one family member. Hackett’s father Bernard, who once was an amateur boxer, is his trainer.

“Not every relationship between father and son is perfect, but his guidance has meant so much”, said Hopkins. “For us to be experiencing this together is special.”

While boxing right now is Hackett’s big thing, he is brimming with confidence because he knows it does not have to be his only thing. With that 3.5 GPA from Cardozo High School, Hackett know he has possibilities beyond the ring.

“The school I didn’t want to fall in the topic of the dumb boxer and be one of those guys that people would say would not be able to do anything if it wasn’t for boxing,” said Hackett. “I want people to know that even if I was not a boxer, I could still take my life somewhere else, and still be financially secure.”

And after boxing Hackett’s somewhere else:

“The college route will definitely take me to a broadcasting and journalism degree because I love to speak in front of people, especially about sports,” said Hackett. “Post boxing I could definitely see Jalil Hackett the sports anchor.”

Rider, 14, dies in crash during motorcycle race in Spain