After a one-year break because of the pandemic, college lacrosse is ready to decide its national champions.
Listen now to WTOP News WTOP.com | Alexa | Google Home | WTOP App | 103.5 FM

After a one-year break because of the pandemic, college lacrosse is ready to decide its national champions, and North Carolina starts in a very good place: The Tar Heels are the top seed for both the men’s and women’s Division I tournaments.

UNC men’s coach Joe Breschi, voted Atlantic Coast Conference coach of the year for the third time, says his players are “having the time of their life.”

The men’s final four will be held in East Hartford, Connecticut, on May 29-31.

“We really focused on our common opponents,” she said. “A lot of times we had to figure out significant wins and losses. I think that was the biggest deciding factor. What’s a good win? What’s a bad loss? It was obviously harder with the data that was available this year. That was difficult to compare schools that maybe played 16, 17 games to those that played maybe 10, 11, 12 games.”

Tim Leonard, athletic director at Towson and the selection committee chair on the men’s side, said UNC’s 15-12 win over Duke in the season finale (after an overtime road loss to the Blue Devils a month earlier) secured the top seed.”

“(There was) a lot more subjectivity than ever before,” Leonard said. “We knew that it was going to be that way. Obviously, you would like to be able to have as much objective data as possible. So that’s why the (committee) was so important. The coaches took care of the eye test for us. We really asked a lot of questions, probably more so than we’ve ever done.”

Other things to know about the Division I lacrosse tournaments:

“Our team has so much depth,” Tar Heels goalkeeper Collin Krieg said. “I feel like we’ve got a lot of good experience, kind of battle tested.”

Syracuse was ranked No. 2 nationally in the preseason polls and was favored to win the ACC. But injuries, a tough schedule and internal problems surrounding high-scoring Chase Scanlan resulted in the Orange finishing 2-4 in the ACC. Scanlan was involved in what campus police called a “domestic incident” involving a woman and was suspended.

The Orange play Georgetown in the first round.

The ACC has five of the eight at-large berths on the men’s side, more than double any other league, and went 31-1 against non-conference foes.

The UNC women won twice on the road by one goal — at Notre Dame and Duke. The closest any other team came was Syracuse, which lost 9-4 to the Tar Heels in the ACC championship game.

Vermont won the America East Tournament after failing three times in the title game and is in the NCAA Tournament for the first time.

“It’s kind of hard to believe where we’ve come from to where we are now. I’m very proud, but it’s just one step,” Vermont coach Chris Feifs said. “We’re not finished. We want to take it beyond this. We’re not satisfied.”

The Catamounts have one of the nation’s best faceoff men in Tommy Burke. He has won 229 faceoffs to lead the country and ranks third in winning percentage (.720). 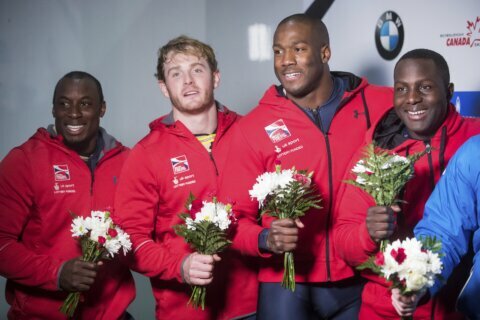