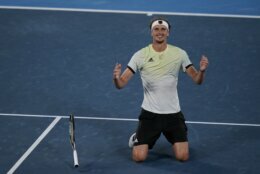 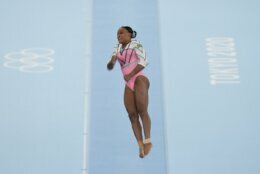 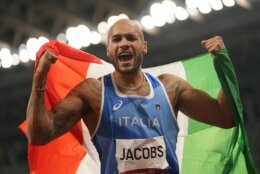 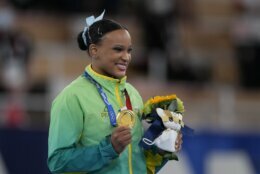 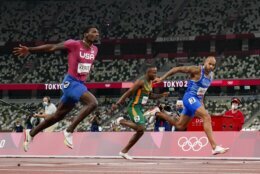 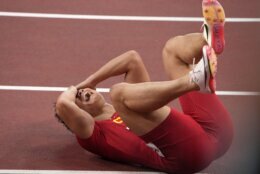 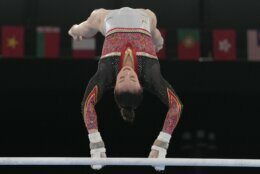 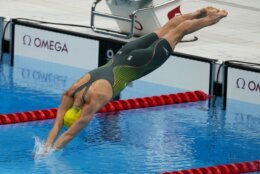 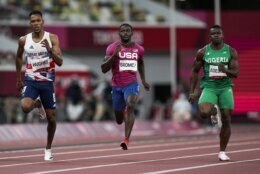 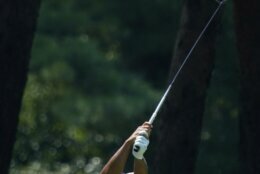 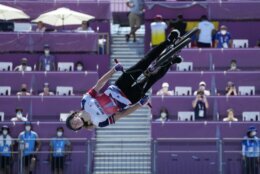 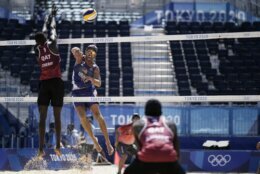 TOKYO (AP) — Caeleb Dressel and Emma McKeon earned milestone medals at the Olympic pool before Italian runner Marcell Jacobs was the surprising winner of the race to determine the fastest man in the world.

Jacobs crossed the line in 9.80 seconds on Sunday to bring the sprint gold to Italy for the first time. Jacobs topped Fred Kerley of the United States and Andre DeGrasse of Canada to take the spot held for the past 13 years by the now-retired Usain Bolt

American sprinter Trayvon Bromell came into the Games as the favorite but didn’t make it to the final after finishing third in his semifinal heat.

Dressel won two more gold medals to give him five in the Tokyo Olympics, winning the 50-meter freestyle and putting the Americans ahead to stay in the 4×100 medley relay on their way to a world record.

“I’m proud of myself. I feel like I reached what my potential was here at these Games,” Dressel said. “It was just really fun racing.”

Dressel join Americans Michael Phelps, Mark Spitz and Matt Biondi, as well as East Germany’s Kristin Otto, as the only swimmers to win as many as five golds at a single Olympics. Phelps did it three times.

McKeon became the first female swimmer and second woman in any sport to claim seven medals at one Olympics. Four of them were gold, the other three bronze.

McKeon won the 50 free and took the butterfly leg on Australia’s winning effort in the women’s 4×100 medley relay.

The only other woman to win seven — in any sport — was Soviet gymnast Maria Gorokhovskaya, who claimed two golds and five silvers at the 1952 Helsinki Games.

“It still feels very surreal,” said McKeon, a 27-year-old from Brisbane. “It’s going to take a little bit to sink in. I’m very proud of myself.”

Mutaz Barshim of Qatar and Gianmarco Tamberi of Italy tied for the gold medal in the men’s high jump.

Both men where clean at every attempt to 2.37 meters and both missed all three attempts at the Olympic record of 2.39.

Yulimar Rojas of Venezuela set a world record with her final attempt to win the women’s triple jump.

Rojas finished the competition with a mark of 15.67 meters to break a record set in 1995. Inessa Kravets of Ukraine held the record at 15.50.

Brazilian gymnast Rebeca Andrade has added a gold medal on vault to go with the silver she earned in the all-around.

Andrade put together a pair of soaring vaults to post an average of 15.083. The medals Andrade has won in Tokyo are the first two for Brazil in gymnastics at the Games.

American gymnast MyKayla Skinner, who entered the competition after defending Olympic champion Simone Biles pulled out to focus on her mental health, captured the silver.

USA Gymnastics said Biles has also opted not to compete on floor exercise. She won gold in the event in Rio de Janeiro and placed second in qualifying last week. Jennifer Gadirova of Britain will replace Biles in Monday’s finals.

Biles has not decided whether to participate in Tuesday’s balance beam final, USA Gymnastics said.

Nina Derwael of Belgium won the gold medal in the uneven bars and Olympic all-around gymnastics champion Sunisa Lee added a bronze medal to her haul in Tokyo.

Xander Schauffele won the Olympic gold medal in golf in a tense finish.

Schauffele was tied for the lead with Rory Sabbatini of Slovakia with two holes to play. The American made birdie from 6 feet on the 17th hole to regain the lead. Then after a bad tee shot that forced him to play short of the water, he hit wedge to 4 feet and made the par to win.

Sabbatini set an Olympic record with a 61 and won the silver.

C.T. Pan of Taiwan, who closed with a 63, won the bronze in a playoff among seven countries that lasted four holes.

Zverev beat Russian opponent Karen Khachanov 6-3, 6-1 for the biggest title of his career.

It follows a comeback victory for Zverev over top-ranked Novak Djokovic in the semifinals.

Luka Doncic will take his unbeaten record with Slovenia straight to the Olympic quarterfinals.

Doncic just missed the first triple-double in the Olympics in nine years and the Slovenians edged Spain 95-87 in a tense and important final game of men’s group play.

Doncic had foul trouble early and shooting struggles all night but finished with 12 points, 14 rebounds and nine assists, one shy of the first triple-double since LeBron James had one for the U.S. in 2012.

The loss left Spain with a difficult quarterfinal matchup against the three-time defending champion U.S. team.

Two American teams are out at the Olympic beach volleyball venue.

The U.S. women’s team of Sarah Sponcil and Kelly Claes also lost in three sets to Heather Bansley and Brandie Wilkerson of Canada after winning the first set.

Claes and Sponcil entered the Games as the hottest team in the world, winning the last two events of the pandemic-extended qualifying period to grab the second U.S. spot in Tokyo. In the process, they knocked out five-time Olympian Kerri Walsh Jennings.

Roberts, a three-time world champion at 19, set the bar in her opening run, landing a backflip with a tailspin for a 96.1.

Worthington crashed on her first run, but pulled out all the stops in her second. The 25-year-old added a front flip to her 360 backflip and closed with another backflip for a 97.5.

Logan Martin of Australia won gold in the men’s event.