With the 2016 Stanley Cup Finals underway between the Pittsburgh Penguins and San Jose Sharks, another member of the 2009-10 Capitals team finally has a chance to earn a Stanley Cup ring.
Listen now to WTOP News WTOP.com | Alexa | Google Home | WTOP App | 103.5 FM

WASHINGTON — Remember the 2009-10 Presidents’ Trophy-winning Washington Capitals? You know, the club that set a franchise record with 54 wins and narrowly edged out the second-place Atlanta Thrashers by 38 points to win the Southeast Division?

Those ’09-10 Capitals were indeed a dominant bunch with seven 20 goal scorers, including a 24-year-old Alex Ovechkin and a 22-year-old Nicklas Backstrom. Surely there were future Stanley Cup champions on that 2009-10 Capitals team, right? They had to be.

Anyway, fast forward six years and only one player from that team has gone on to win the Stanley Cup since that dominant regular season. Back in 2013-14, Jeff Schultz made a cameo appearance with the Los Angeles Kings appearing in seven postseason games for the eventual Stanley Cup champions.

He also got to spend the day with the Cup in summer 2014, making for an epic celebratory picture.

In any case, with the 2016 Stanley Cup Finals underway between the Pittsburgh Penguins and San Jose Sharks, another member of that 2009-10 Capitals team finally has a chance to earn a Stanley Cup ring as Eric Fehr suits up for the Penguins (unlike Schultz, Fehr will actually play in the Finals, which technically makes him the first player from that ’09-10 Capitals team to do so).

Fehr spent parts of nine seasons with the Capitals recording 87 goals and 174 points in 417 games. He signed a three-year deal with the Penguins last July.

While Fehr is the first member of the 2009-10 Capitals to play in the Stanley Cup Finals, he won’t be the only former Capital suiting up in this year’s championship series.

Fehr and Ward overlapped for parts of three seasons in Washington.

“I’ve never played a former friend in the Cup final before,” Fehr told reporters before Game 1 in Pittsburgh. “It will be different but I think it will be easier than playing against your entire old team … it’s nice to see familiar faces, but we’ll talk two weeks from now.”

Fehr has two goals and three points in 17 playoff games with Pittsburgh; Ward has six goals and 11 points in 18 games with the Sharks and Zubrus has a goal and an assist in nine postseason games this spring. 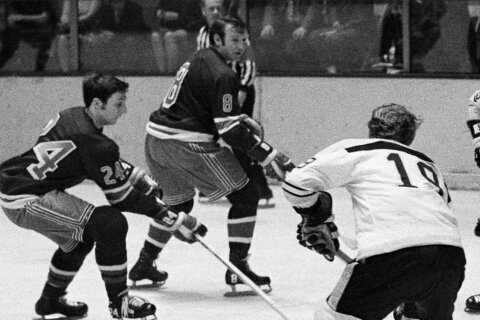