Jets QB Wilson not placed on IR, could miss only 2 games

NEW YORK (AP) — The New York Jets are optimistic about quarterback Zach Wilson’s sprained knee, choosing to not place him on injured reserve Saturday with the hope the rookie could return after missing just two games.

Wilson sprained the posterior cruciate ligament in his right knee during the Jets’ 54-13 loss at New England last Sunday. He had already been ruled out for Sunday’s game against Cincinnati.

Coach Robert Saleh said Friday the team was still weighing its options with Wilson, whose initial recovery time was set at two to four weeks. By placing him on IR, the Jets wouldn’t have Wilson available again — if healthy — until their home game against Miami on Nov. 21.

New York has a short turnaround with a game next Thursday night at Indianapolis, so he’ll also sit out that game. But by not putting Wilson on IR on Saturday, the Jets left the door open for Wilson to potentially return Nov. 14 against Buffalo at home.

Mike White will make his first NFL start against the Bengals on Sunday. Josh Johnson was elevated from the practice squad Saturday and will serve as White’s backup.

The Jets traded for veteran Joe Flacco last Monday, but he didn’t practice with the team until Friday and will be inactive Sunday. He could be in the mix to start next Thursday night if White falters.

Beyond that, the health of Wilson’s knee will determine who starts at quarterback.

In other moves Saturday, New York activated linebacker Jarrad Davis from IR and he’s set to make his debut with the team after being sidelined since late in training camp with an ankle injury. The Jets should have their projected starting middle linebackers in the lineup together for the first time with C.J. Mosley expected to play after missing the game at New England with a hamstring injury.

Wide receiver Corey Davis remained unlikely to play after injuring his hip in practice Thursday and sitting out Friday. He was listed as doubtful after Saleh said it was “not looking good” for Davis’ chances. Denzel Mims and Keelan Cole could see more action if Davis sits. 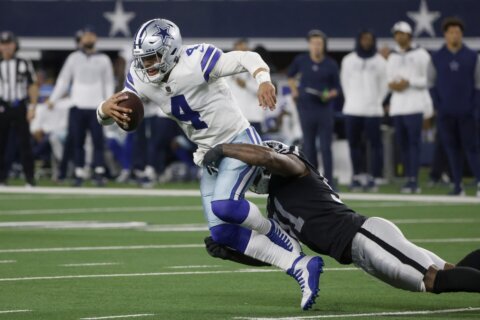