PITTSBURGH (AP) — It’s not enough to talk about changing the culture, something Zac Taylor started doing the moment he took over as Cincinnati Bengals head coach more than two years ago.

At some point, the platitudes need to turn into something far more tangible. Something like Sunday’s 24-10 win over the Pittsburgh Steelers at Heinz Field, a victory that signaled Taylor’s rebuilding project may finally be gaining traction.

The second-year quarterback and rookie wide receiver who were record-setting teammates while helping LSU to the 2019 national title, connected on a pair of touchdown passes as the Bengals (2-1) beat the Steelers (1-2) on the road for the first time since 2015.

“We’re starting to understand how to win,” Burrow said.

Against Pittsburgh, that meant keeping Burrow upright. It’s something the Bengals failed miserably at during their previous visit to Heinz Field last November when Burrow was sacked four times in a blowout loss.

Minus outside linebackers T.J. Watt and Alex Highsmith, both nursing groin injuries, the Steelers not only saw their NFL-record streak of 75 straight games with a sack end. They failed to hit Burrow even once as he completed 14 of 18 passes for 172 yards with three touchdowns and an interception.

It looked like it too. The Bengals controlled the line of scrimmage for long stretches on both offense and defense.

They took down Pittsburgh quarterback Ben Roethlisberger four times, picked him off twice and hardly looked rattled when the Steelers picked up the pace while trying to unsuccessfully scramble out of a 17-point deficit.

“It’s fun watching the other quarterback on his back,” Taylor said. “Our guys are relentless with pressure.”

Something that hasn’t been a problem for anyone facing a Steelers offensive line that is suffering through some highly visible growing pains.

When the group wasn’t letting the Bengals wreak havoc in the Steelers backfield, they were committing drive-killing penalties.

All five Pittsburgh offensive line starters drew at least one flag before two of them — center Kendrick Green and right tackle Chuks Okorafor — left in the second half with injuries.

“We’ve got to be better, man,” Steelers coach Mike Tomlin said. “We’re not putting ourselves in a position to win playing the way we played today.”

The game turned late in the first half after Pittsburgh put together a long touchdown drive to tie the score at 7 with 1:04 to go in the second quarter.

Chase noticed Steelers defensive back James Pierre was waiting too long to turn his hips and run whenever Chase went deep. Chase mentioned it to Burrow, and Burrow responded by lobbing a rainbow Chase hauled in for a 34-yard touchdown with 37 seconds to go before the break.

“It was a hell of a throw by Joe,” Chase said. “He laid me out forward, not behind, not a jump ball … but in front of me and that’s what a receiver wants. To make an extended catch like I did, it was perfect timing.”

Burrow found Chase again for a 9-yard score midway through the third quarter, three plays after linebacker Logan Wilson picked off Roethlisberger for a second time. The touchdown — Chase’s fourth in just three games — gave the Bengals a cushion the Steelers never really threatened to close.

Several times Pittsburgh tried to make it interesting. Each time Cincinnati’s defense responded with the stop needed to send boos cascading toward a home team not used to getting pushed around by the visitors.

“It’s an exciting time to be a fan of the Bengals and we’re just going to keep this rolling,” Burrow said.

The Steelers have yet to score a point in the first quarter and have spent the vast majority of their first three games playing from behind. They led only briefly last week against Las Vegas and were never in front of the Bengals after their first eight drives generated a total of seven points.

Roethlisberger, who completed 38 of 57 passes for 318 yards with a touchdown and two picks shrugged when asked what’s plaguing the offense in the early going.

“If we had the answers, we’d do everything we could to fix it,” he said. “Right now, it’s just lack of execution for whatever reason.”

Rookie running back Najee Harris ran for 40 yards and caught 14 passes for 102 more as often the only playmaker at Roethlisberger’s disposal. His 14 receptions were the most ever in a game by a Steelers running back.

Bengals: CB Chidobe Awuzie left in the second half with a groin injury.

Steelers: WR JuJu Smith-Schuster left in the second half with a rib injury and did not return. … Okorafor went out with a possible concussion while Green is dealing with a knee injury.

Steelers: Visit Green Bay next Sunday. Pittsburgh has won each of its past two visits to Lambeau Field, including a 38-31 win in 2013. 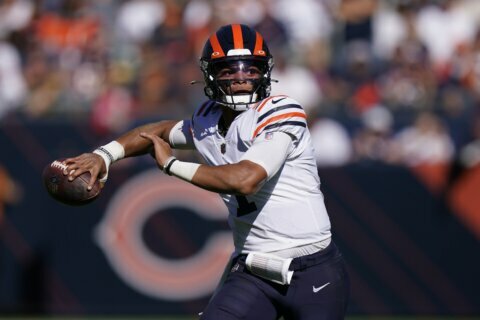 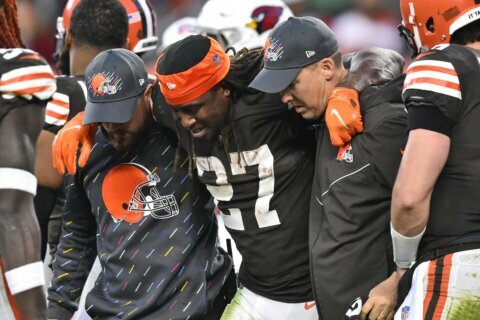 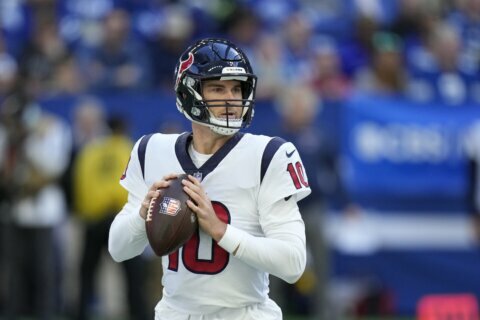