NEW YORK (AP) — New York Jets safety Marcus Maye signed his franchise tag tender from the team on Saturday, and the sides have until July 15 to negotiate a long-term deal.

Agent Erik Burkhardt confirmed that Maye had accepted the tag, which is worth $10.6 million.

The 28-year-old Maye has been a steady playmaker and leader for the Jets, who drafted him in the second round out of Florida in 2017. General manager Joe Douglas said in January that Maye’s contract situation would be a top priority for the team this offseason.

NFL Network first reported that Maye had accepted his franchise tag tender. By placing the tag on Maye last week, the Jets prevented him from becoming an unrestricted free agent when the NFL’s new league year began Wednesday.

If the sides can’t agree on a long-term deal by the mid-July deadline, Maye would play this season under the tag amount and be scheduled to become an unrestricted free agent next offseason.

Maye was the first Jets player to be tagged since Muhammad Wilkerson in 2016. Wilkerson was signed to a long-term contract later that summer.

Maye has played in every game the past two seasons, erasing any doubts about his health after a shoulder injury limited him to six games in 2018. He also showed how versatile he is while playing in coverage and close to the line of scrimmage — taking over the role previously held by Jamal Adams.

He was selected a team captain and then voted the team MVP by his teammates last season after he finished with 78 tackles, two interceptions, two sacks, two forced fumbles, a fumble recovery and a team-leading 11 passes defensed. Maye has six career interceptions, 22 passes defensed and 257 total tackles.

Burkhardt recently criticized the Jets before they used the franchise tag when he replied to a Twitter post about the team having plenty of money to spend in free agency, saying the Jets “refuse to take care of their best player, Captain, & team-voted MVP in his prime who had several All-Pro votes.” He also noted that Maye played out his rookie deal and changed positions during a contract year.

Douglas downplayed those comments, saying he didn’t think they would affect getting a deal done. The sides moved a step closer in that direction by Maye accepting the tag. 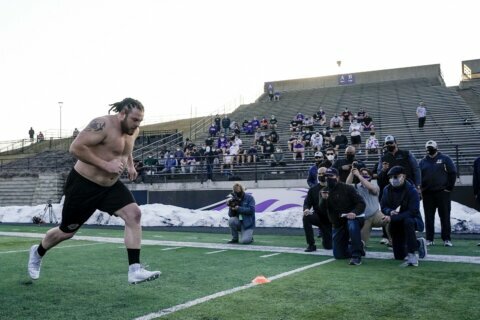