The NFC North is a two-horse divisional race between Green Bay and Minnesota -- but which will emerge victorious and realize its Super Bowl potential?
Listen now to WTOP News WTOP.com | Alexa | Google Home | WTOP App | 103.5 FM
(1/4) 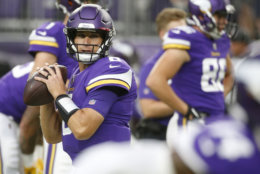 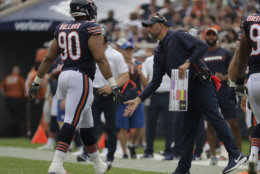 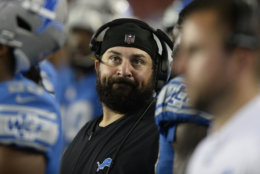 The last time Aaron Rodgers broke his collarbone, he came back to win MVP.

He’ll have ample opportunity to do it again in 2018.

For the first time in 25 years, the Pack dipped deep into free agent waters, signing Jimmy Graham to serve as Rodgers’ best red zone target in years, and Muhammad Wilkerson to shore up a defensive line in need of some talent. Even Clay Matthews isn’t a fan of the depth at linebacker, but Packers fans finally got their wish: Longtime defensive coordinator Dom Capers is gone, and Mike Pettine takes over in a year when Green Bay spent its first two draft picks on corners.

A healthy Rodgers will make the offense great again, so Pettine’s success turning around a perennially disappointing defense will decide whether the Pack reclaim the division from Minnesota. If he does, the Packers’ 100th season could be a Super one.

The Minnesota Miracle was great, but Philadelphia Flop (or Phlop?) is what drove the Vikings offseason.

With a borderline dominant defense returning the vast majority of the starting lineup from 2017’s top-ranked unit, the Vikes rolled the dice at QB, signing Kirk Cousins to the first fully guaranteed contract in NFL history, and also signing on for his corniness.

People like to give me a hard time, but it still runs well… pic.twitter.com/9giAGYHlor

While Dalvin Cook’s return from injury will give Cousins the sort of run-pass balance he never got in Washington, he’ll play behind a banged up offensive line that will be without Nick Easton for the season. That’s a tough ask for a passer still adjusting to stud targets like Kyle Rudolph, Adam Thielen and newly paid playoff hero (and former Terp) Stefon Diggs. Cousins probably won’t put up the same numbers he did as a Redskin, and Minnesota probably won’t have a gaudy record like last year’s — Captain Kirk will do enough to keep the Vikings in lockstep with Green Bay for the division title, and maybe even beam up a return trip to the conference title game.

Minnesota would Vike that. (Editor’s Note: No.)

Chicago tabbed Matt Nagy to be their head coach because they think he can replicate what Sean McVay did in L.A. last year, authoring an unexpected turnaround and making their second-year QB a stud.

That’s a tall task in a division with the Packers and Vikings, but Mitchell Trubisky should make some positive strides with new targets Allen Robinson and Trey Burton to throw to, and underrated run options Jordan Howard and Tarik Cohen.

Holdouts helped and hurt the Bears defense: Khalil Mack landed in the Windy City via blockbuster trade and promptly signed an extension that makes him the highest paid defender in football, a deal the Raiders never wanted to give him. The move helps solidify a really good front seven that was initially hurt by eighth-overall pick Roquan Smith’s holdout. Smith is also nursing a hamstring injury, so he and Mack will need time to get up to speed — but once they do, Chicago could be better than my initial six-win prediction.

Matt Patricia has eluded allegations from his past to bring the Patriot Way to Detroit. He brings another former Patriot, LeGarrette Blount, to Motown to fix a long-dormant run game that also added Kerryon Johnson in the draft. That should finally take some pressure off 10th-year starting QB, Matthew Stafford.

Since he’s already got his QB, Patricia’s big challenge will be fixing the defense. The key will be getting another quality season from the injury-plagued Ezekiel Ansah, whose offseason highlights included getting franchise tagged and being placed on the PUP list. If he can be healthy and productive, creating opportunities for a talented secondary, the Lions could surprise some people.