CHICAGO (AP) — It was Jose Altuve, Carlos Correa and Alex Bregman once again.

The Houston Astros are going to the AL Championship Series for the fifth straight year. Their October-tested stars led the way.

Altuve hit a three-run homer and scored four times, and Houston eliminated the Chicago White Sox with a 10-1 victory in Game 4 of their AL Division Series on Tuesday.

“We don’t get tired of this moment,” Correa said. “They’re special, and we perform our best when October comes.”

Correa and Bregman each hit a two-run double as the Astros bounced back from Sunday night’s 12-6 loss with their usual relentless brand of baseball. Michael Brantley had three hits and two RBIs.

Next up for Altuve and company is Game 1 of the ALCS against former Astros bench coach Alex Cora and the Boston Red Sox on Friday in Houston. The Red Sox eliminated Tampa Bay with a 6-5 victory in Game 4 on Monday night.

It’s Houston’s second ALCS under 72-year-old manager Dusty Baker, whose club got the best of 77-year-old Chicago skipper Tony La Russa. Baker replaced A.J. Hinch, who was fired in the fallout from the Astros’ 2017 sign-stealing scandal that also resulted in a one-year ban for Cora.

“There is a character choice there that they should answer for,” La Russa said. “Stupid, too.

“I’ll be interested to see if they admit it. If they don’t admit it, then they’re very dishonest.”

Baker, who has sparred with La Russa in the past, said his team did not throw at Abreu intentionally.

“There was no reason for us to hit Abreu,” Baker said. “He hadn’t done anything to us.”

Gavin Sheets connected for Chicago, becoming the third rookie in franchise history to homer in a postseason game. But Carlos Rodón was knocked out in the third inning of his first start since Sept. 29, and the AL Central champions left eight runners on base.

The White Sox also lost in the first round of the 2020 playoffs, dropping two of three in Oakland. Before this year, the franchise had never made consecutive postseason appearances.

“It was a fun ride. Ended a little short,” Rodón said.

The Astros are looking for the franchise’s second championship after winning it all in 2017, a title that still evokes a strong reaction around the game after the team was punished for using electronics to steal signs.

The crowd at Guaranteed Rate Field chanted “Cheater! Cheater!” at times during the two games in Chicago, and White Sox reliever Ryan Tepera implied late Sunday night that Houston may have been stealing signs in Games 1 and 2.

But the Astros, used to dealing with boos since fans returned to the stands this season, brushed it all off.

“We’ve been constantly bombarded by negatives, especially on the road,” Baker said. “But these guys, they come to play and they love each other.”

Correa put Houston ahead to stay with his two-out double in the third, pulling Rodón’s high 0-2 fastball into left. The Astros loaded the bases on two walks and a fastball that hit Altuve, drawing a round of cheers from the crowd of 40,170.

Correa pointed to his left wrist and then pounded his chest and yelled “It’s my time!” as he stood on second after the big hit in his 67th career postseason game.

“You know what time it is, baby. It’s October,” Correa said after the victory. “So yeah, I was happy with that.”

That was it for Rodón, who was limited down the stretch because of shoulder soreness and fatigue. Running his fastball into the upper 90s again after another extended break, the left-hander was charged with two runs and three hits in his first career playoff start.

“He gave us everything he had,” La Russa said.

Houston added three more in the fourth for a 5-1 lead. Kyle Tucker singled and swiped second and third — the latter without a throw — before coming home on Martín Maldonado’s first hit of the series.

Bregman drove in Maldonado and Altuve with his two-out double on a 3-0 pitch from Garrett Crochet. The left-handed reliever then struck out the lefty-batting Yordan Alvarez, ending the inning.

The big hits by Correa and Bregman supplied more than enough offense for Lance McCullers Jr., who departed with right forearm tightness after four effective innings. Yimi García got three outs for the win.

McCullers also pitched 6 2/3 scoreless innings in Houston’s 6-1 victory in Game 1 on Thursday. If he can’t go in the ALCS, it would be a big blow for the Astros.

“I don’t think it has anything to do with my ligament,” he said. “We’ll have to just wait and see how I feel tomorrow and if we’re going to get any imaging done, things like that.”

“We’ve been here five times,” Altuve said. “And we just try to pass it on to the guys who are getting here for the first time.”

Sheets’ drive in the second bounced off the top of the wall and over. Astros center fielder Jake Meyers crashed into the wall trying to make a leaping grab, and then departed with left shoulder discomfort.

The White Sox lost their center fielder when Luis Robert left with right leg tightness before the Astros batted in the seventh. 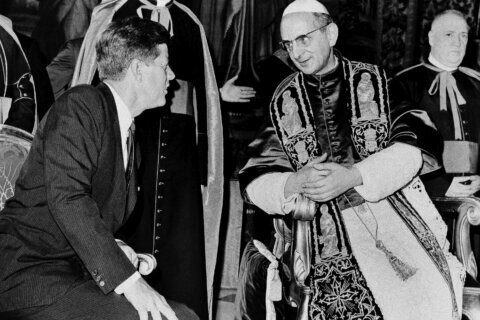