Three Metro lines are up and running Tuesday morning after a water main break caused a major headache for commuters on the rail and the road.
Listen now to WTOP News WTOP.com | Alexa | Google Home | WTOP App | 103.5 FM
(1/19) 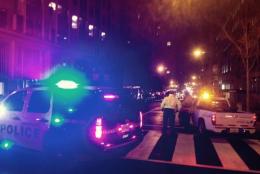 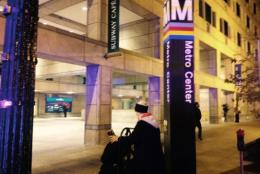 WASHINGTON — Three Metro lines are up and running Tuesday morning after a water main break caused a major headache for commuters on the rail and the road.

Service was suspended on Metro’s Blue, Orange and Silver lines between McPherson Square and L’Enfant Plaza because of a water main break at 12th and F streets near Metro Center.

Although Metro trains are running, the water main break is still causing delays above ground. In Northwest D.C., 12th Street is closed between E and F streets.

D.C. Water says the 12th Street closure will last until some time between 6 p.m. and 8 p.m. while repairs are being made.

The break, which occurred at about 5 a.m., affected tens of thousands of commuters. Metro service was restored on the lines by about 8:40 a.m.

“There is going to be no way to sugar coat this — you’re going to want to seek alternate travel options if your travel takes you anywhere on the Blue, Orange or Silver lines [Tuesday] morning,” Metro Spokesman Dan Stessel said.

Earlier Tuesday, Stessel said the rail suspension could last through the day, but updated the estimate at about 8:30 a.m., saying rail service could be restored “in the next hour.”

The rails were submerged at the stations, Stessel says. When the main broke, water entered from the 12th and F streets’ entrance and flowed through the station, causing the rails to be underwater.

During the suspension, service on the Yellow, Green and Red lines operated normally.

While Metro’s lines faced delays, there was extra traffic through downtown D.C. Metro attempted to provide bus service to commuters who couldn’t take the rail service, but as Stessel noted, “it will take hundreds of buses in the height of rush hour to replicate that level of service that would normally be operating on Metro rail.”

Crews worked to pump the water out of the submerged stations and they gave the all-clear at about 8:30 a.m. Metro deployed a few test trains before allowing passenger trains to travel.

The 12-inch water main that broke was installed in 1953. Two buildings in downtown D.C. are without water Tuesday morning.

Earlier, Metro suspended service between Farragut West and Metro Center, but extended the suspension at about 8 a.m.