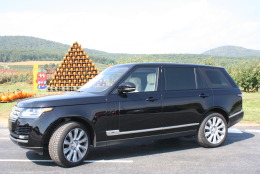 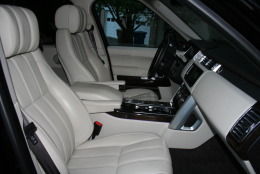 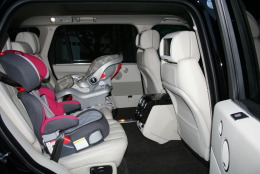 WASHINGTON — The big thing lately is to release stretch versions of large luxury
cars to appease those riding in the back seat.

And while I hoped to be driven around in those reclining, climate-controlled
rear seats, unfortunately, I had to drive. My daughter had plenty of space for
the ride to school, and for some longer trips, she had room for everything
without crowding the floor space.

The driver’s seat is still a good place to be though. The $4,150 four-zone
climate comfort package made sure of that. Front seats are heated and cooled,
but there’s also a massage feature that helps you forget about rush-hour
traffic.

The headrests were like pillows, making for a comfortable long distance
cruiser for anyone lucky enough to experience the Range Rover LWB.
The larger space in the rear also means larger rear doors, which make getting in
and out easier. Watch out when parking: The big doors take up a lot of space,
and parking spaces seem to be getting smaller.

The entire interior is top-notch and classy. It also feels very nice to the
touch — the leather feels great; the optional shadow walnut veneer trim really
brings the interior together. Even the rear-seat entertainment looks well
integrated, not an afterthought like on some vehicles.

However, I do wish the paddle shifters weren’t made of plastic. They feel cheap
in relation to the other nice amenities. Though the navigation isn’t the
quickest, it seemed to know where I wanted to go. The 825-watt Meridian premium
sound system sounds nice, too.

I last drove the Range Rover Sport, a sportier-driving SUV with a little more
engine noise that feels fast and a little naughty at times (in other words, my
kind of ride). The Range Rover LWB is a more understated drive with a pure luxury feel. Even with large 21-inch wheels, the ride was really good; only the bigger bumps are felt.

Even with 510 horsepower under the hood, I never felt the need to really open it
up. Instead, I just took my time and enjoyed the ride. Maybe the more relaxing
drive helped me a little with fuel economy, as I averaged 18.2 miles per gallon
of premium fuel over 300 miles, which doesn’t sound great, but the big Range
Rover is rated at 14 mpg city and 19 mpg on the highway.

I was skeptical of the larger Range Rover. You pay more, and it’s geared to a
more luxury SUV than I would usually like. But after a drive in the country, my
mindset changed.

With the large, panoramic sunroof open and watching the changing colors of the
season in pure comfort, I quickly realized that I was enjoying the sights more
thanks to the bigger Rover.

If you’re looking for a Range Rover with some extra space and even more luxury,
the new Range Rover LWB has you covered.