Holidays: 'Enchant' shines with millions of lights in Nats Park | Where to see holiday lights | Send in photos of decorations | How to give greener this season
Home » Latest News » Injured Fairfax County bald…

A bald eagle rescued in Fairfax County by an animal control officer this week had to be euthanized.
Listen now to WTOP News WTOP.com | Alexa | Google Home | WTOP App | 103.5 FM
(1/3) 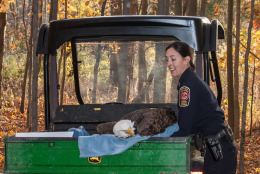 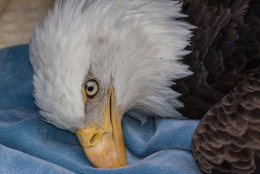 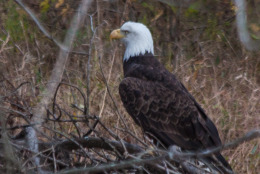 WASHINGTON – A bald eagle rescued in Fairfax County by an animal control officer this week had to be euthanized.

Veterinarians at the Virginia Wildlife Center determined the bird’s dislocated shoulder could not be rehabilitated, according to photographer Michael Q. Powell, who photographed the eagle, and the Fairfax County Police Department.

“The extent of the injuries to the bird, including ocular lesions in both eyes, indicated that he would not have been a good candidate for either permanent captivity or release back into the wild, according to wildlife experts. He was humanely euthanized,” the police department wrote on its Facebook page.

On Monday, Fairfax County Animal Control Officer Kathy Prucnal used a blanket to scoop up the injured bird after chasing it through marshy woodlands at Huntley Meadows Park, according to the Fairfax County Police Department.

A veterinarian who treated the bird determined it may have been poisoned from pesticides.

Park visitors contacted police about the injured bird and one visitor helped block the bird’s escape route as Prucnal moved in to rescue it, police say.

It had been hoped that the eagle would be able to recuperate and be released into the wild.