Maryland has a problem you can help solve with a rod and reel, or just your fork.
(1/2) 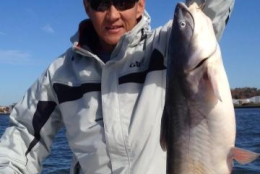 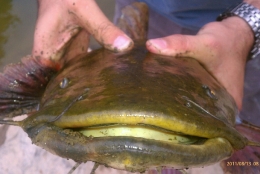 WASHINGTON — Got plans this weekend?

Maryland has a problem you can help solve with a rod and reel, or just your fork.

Though blue catfish and flathead catfish were introduced to our region decades ago, they’re now considered an invasive species.

Yet in the 1980s, a blue catfish was a rare find in the Potomac.

“It wasn’t until the ’90s that they started becoming more abundant, and particularly in the mid to late ’90s, we started to see that population really explode,” says Don Cosden, Chief of Inland Fisheries for the Maryland Department of Natural Resources.

Nowadays, the blue catfish is established throughout the tidal fresh portion of the Potomac.

“Their salinity tolerance is much greater than the other catfish species, so they’re found well below the Route 301 bridge in many of the tributaries,” Cosden says. “In the springtime, when there’s a lot of rain and salinities are low, they may range almost to the mouth of the Potomac River.”

He says flatheads were introduced in both Virginia and Pennsylvania, and eventually came down the Susquehanna River into the Chesapeake Bay. They’ve been discovered recently in the upper Potomac River.

“When I say upper, I mean above Great Falls, the non-tidal portion,” Cosden continues. “Just in the last two years, we’ve seen a good number of fish starting up in the area around Hagerstown. They apparently have spread out since then and appear to be establishing a viable population in that area.”

Both of these fish can get so big, they can be a threat to popular sport fish. The big fish are called apex predators, and they feed on anything smaller than them in the food chain.

Invasive species are almost impossible to remove from a given area, but the Maryland DNR hopes fishermen and demand from hungry diners can help evict them.

“We’re asking anglers to help us by keeping these fish when they catch them,” Cosden says. “They’re very good to eat. Blue catfish have become very popular recently. There’s even a growing commercial fishery.”

Also, the flathead is called a shovel head because of the way it looks.

Fishermen are used to dealing with limits on certain fish that are put in place to try to protect them from over-fishing. “In this case, we’d prefer that you help us over-fish these two species.” Cosden concludes.

Read more about the blue and flathead catfish online.