There\'s a compete transformation that\'s happening to the Springfield Mall. The mall was basically razed and now in its place will be the rising of a new Springfield Town Center.
(1/2) 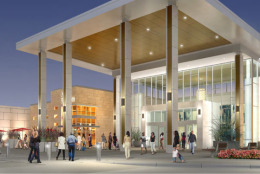 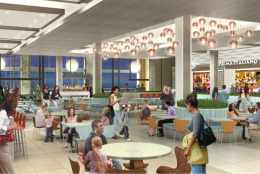 WASHINGTON — There’s a compete transformation that’s happening to the Springfield Mall. The mall was basically razed and now in its place will be the rising of a new Springfield Town Center.

“The inside will look nothing like the old mall looked like and this is phase-one that’s going to be opening in October”, says Fairfax County supervisor Jeff McKay of the Lee District.

The first phase opens the end of October and will provide shoppers with a mall that’s totally different. The old mall has been gutted and rebuilt with the exception of a few anchor stores like Target, JC Penney and Macy’s.

McKay says it’s all about putting the old mall in the past. For years, the Springfield Mall was in decline and some customers reported no longer feeling safe to shop there.

“When it does get reopened people will be amazed at the complete transformation,” he says.

The $200 million mall transformation will include valet parking, a multi-movie cinema, health club and is being promoted as a premiere shopping destination with a 700-seat food court that has outside dining and a kids play area.

While the opening is soon, it’s not soon enough for Springfield residents. “They’ve been waiting many, many years for this day to come,” McKay says adding that taxpayers will not feel the brunt of costs since the town center project is 100 percent private-sector development.

“There’s no public money in it whatsoever,” he says.

McKay, who grew up in the Springfield area and spent his life going to the mall, says it might be hard for people who don’t live in Springfield to understand that the mall is a big part of life in the area and critical for long-term economic success. He says once he was elected in 2007 as the Lee District supervisor, he rolled up his sleeves and began trying to get the mall turned around.

“This has always been for Springfield and our end of the county, much more than a shopping center,” he says. And that’s why he’s put so much personal effort into the mall’s transformation. He adds that he is happy to see the mall is being transformed into a “vibrant place that the community can be proud of.”

McKay hopes decades from now people will look back on this project saying, “Thank goodness they fixed the mall and the whole community can benefit from this. It’s such a big deal.”

Eventually the town center, a 78-acre site, will include office space, 2,000 residents units and a large hotel that it will be walkable from where people live and work.

Future tenants include 150 retailers, restaurants and more including: