Edgar Allan Poe\'s lifeless body has been found in a gutter, yet signs of the reclusive writer have been found all over Baltimore. A team of muckraking journalists sift through the clues to find out what happened to him.
Listen now to WTOP News WTOP.com | Alexa | Google Home | WTOP App | 103.5 FM
(1/3) 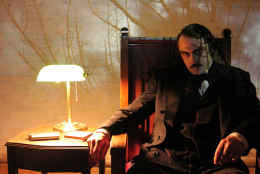 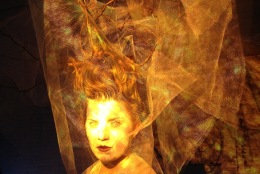 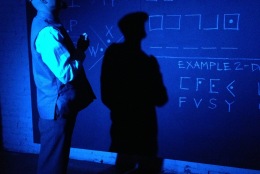 WASHINGTON — Edgar Allan Poe’s lifeless body has been found in a gutter, yet signs of the reclusive writer surface all over Baltimore. A team of muckraking journalists sift through the clues to find out what happened to him.

Welcome to “A Dream Within a Dream,” an “immersive, transmedia production” that invites audience members to become part of the plot.

“We turn the story on its head,” says co-writer, director and producer Nasreen Alkhateeb.

“It’s not necessarily theater, film, dance or performance art. It’s all of the above.”

There is no stage and there are no seats. Instead, audience members walk through different scenes from Poe’s collection and meet a cast of twisted and tragic characters.

Familiar stories include “The Raven,” “The Pit and the Pendulum” and “The Fall of the House of Usher.” Poe enthusiasts also have a chance to dive into more obscure poems such as “The Oval Portrait.”

Each vignette in “A Dream Within a Dream” offers a clue as to how Poe might have died. Was he killed by a rival writer or a jealous lover?

History has never quite answered that question. Poe died in 1849 in Baltimore’s Washington College Hospital after having disappeared for several days. Theories about the exact cause of death include excessive drinking, rabies, heart failure and murder. But details of his final days remain sketchy at best, and Poe’s death will remain one of literature’s greatest unsolved mysteries.

“A Dream Within a Dream,” titled after a poem of the same name, uses that as its premise to immerse the audience in Poe’s macabre world.

First we meet Virginia Clemm, Poe’s young cousin and wife who died from tuberculosis, a disease that also claimed Poe’s mother, brother and foster mother. Virginia’s haunting presence is the first hint that this world plays by its own rules, similar to the production itself.

Alkhateeb says she and her co-creators were influenced by immersive theater, or promenade theater, which was big in the 1960s and is making a comeback. In this type of storytelling, location is key. The set could be a hotel or courtyard, which is transformed to become a character within the play.

“A Dream Within a Dream” takes place in an empty building on New York Avenue, in Northwest D.C. The front window is converted to look like the headquarters of a newspaper called “The Union Stylus.” Theatergoers are taken up several flights of stairs into a warehouse room filled with characters from Poe’s imagination, each corner coming to life with some twisted scene of external torture or internal torment.

“It’s more like an installation than it is a sit-down, audience-stays-quiet type of experience,” Alkhateeb says.

“These characters are coming to life and we’re inviting audience members to interact with the performers.”

You don’t need a working knowledge of Poe’s literary canon to enjoy the show, though some background could prove helpful, if only to lessen the shock of some of the scenes (“The Fall of the House of Usher” is especially creepy).

Actor Ian Rogers brings Poe to life in a manic, almost obsessive way. We meet the writer as a ghost, still mourning the loss of his dear Virginia and unable to cope with the grief left in her stead.

Rogers says he didn’t dive into Poe’s biography, but let the script guide his portrayal of the writer.

“We created our own reality,” he says. “I get to go a little bit crazy, which probably makes me a much healthier person.”

Alkhateeb, a video producer for NASA, says she is attracted to Poe because “he is not afraid of the macabre” and “explores un-satisfaction in his characters.”

“I’ve always been naturally drawn to storytelling as a whole,” she says. “Some of the first monster films I saw as a kid inspired me to do special-effects makeup and start a career in filmmaking.”

Alkhateeb lists John Carpenter and Guillermo del Toro as some of her biggest inspirations. Their influences are clear in certain aspects of the production — especially makeup and set design — but the show is suitable to younger audiences as well.

“A Dream Within a Dream” is co-created, co-produced and co-directed by Alkhateeb, Jennifer Schwed, Christina Helm and Doug Bradshaw. Bradshaw is also the main writer.

Fans of the macabre can see the play as part of Capital Fringe Festival, which runs through July 27 at various locations in D.C. Click here for showtimes and ticket information.