Summer vacation has officially started for many kids and parents are itching to find something fun for the whole family. Six Flags America is kicking off the season with some brand new attractions.
(1/4) 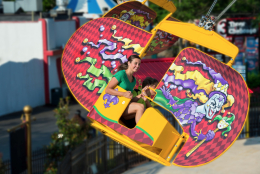 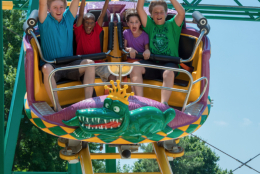 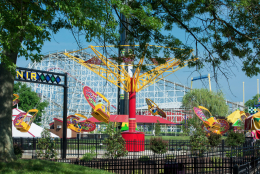 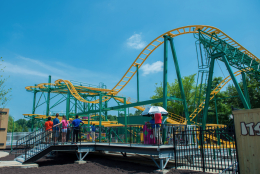 UPPER MARLBORO, Md. – Summer vacation has officially started for many kids and parents are itching to find something fun for the whole family. Six Flags America is kicking off the season with some brand new attractions.

“French Quarter Flyers is a family-friendly flying ride. It has eight cars and you can go up to 40 mph. You have the wing in the front and you move it left to right.

“You can make the ride as wild as you want. Lots of little kids, moms, and dads like this ride,” Six Flags America Communications Manager Havilah Ross says.

The Ragin’ Cajun is the park’s ninth roller coaster.

“It’s a spinning roller coaster. You go up the hill.You have twists and turns. You go down dips. You zip and zag all over the course,” Ross says.

“It’s kind of deceiving because it looks like its an easy ride and people are like, ‘Yeah I got that ride, no problem.’ And then they get off and they’re like, ‘Whoa that was so cool! I can’t believe it! That was so much more intense that I thought!’ So don’t be deceived.”

Ross says no two rides are the same because factors like weight make the velocity and movement unique each time. The coaster will be open to the public on Saturday, June 21.

Michael Bannigan, 18, a member of the Six Flags America dance cast, tested the Ragin’ Cajun for the first time.

“I really liked it. It was a lot of fun,” Bannigan says.

“I look forward to summer even more now that I work here,” Bannigan says.

“We have regular walking stilts and jumping stilts. We have them jumping around in all of our shows and walking around for ‘streetmosphere,” says stilt master Anthony Lee.

Lexi, a dancer, was one of the first to ride the French Quarter Flyers.

“I enjoyed it a lot. I giggled like a little girl,” she says.

“My favorite part is just interacting with the guests, seeing them smile, and knowing you’re making their day better.”

The park also installed a new bar stocked with beer on tap and mixed frozen drinks.

“If you come during the World Cup, you can watch it while you’re sitting here relaxing on our patio,” Ross says.

If you need a spot to cool off, take a stroll over to the water park area. “The wave pool has almost 1 million gallons of water,” Ross says.

The Bonzai Pipelines is like a wet, waterside roller coaster that stands six-stories tall and launches guests into a free fall.

Gold season passes are $74.99 and include free parking and unlimited admission to all Six Flags theme parks until Nov. 1.