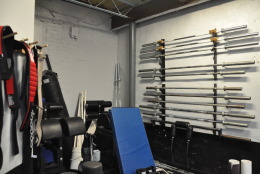 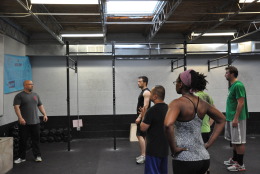 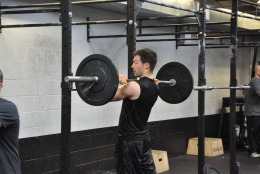 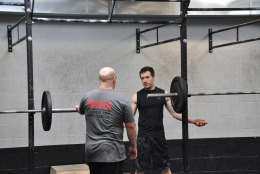 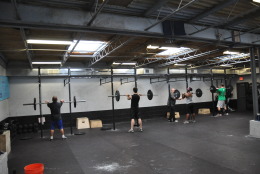 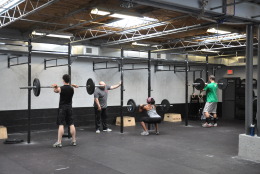 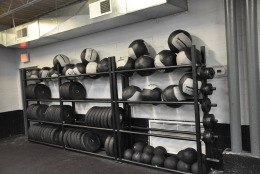 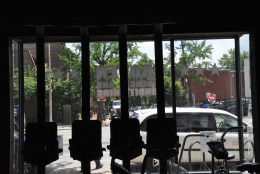 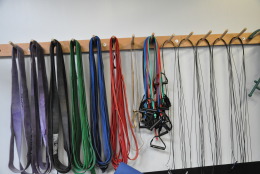 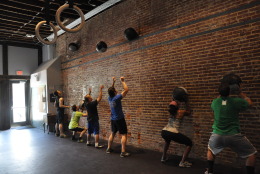 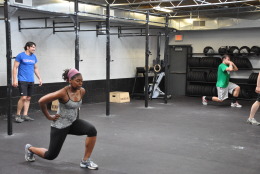 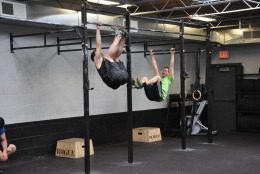 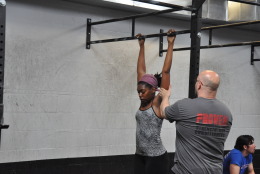 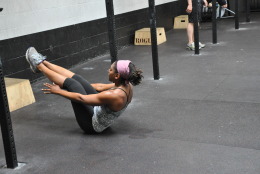 WASHINGTON — “There’s a funny joke out there: How do you know if someone is a crossfitter?”

Mark Minukas wipes the sweat off his face with his blue T-shirt; a touch of loose white chalk from his hands replaces the sweat over his eye. He just completed an hour-long workout at CrossFit DC on 14th Street.

It was my first time in a crossfit gym — or “box” as crossfitters call it. My muscles ached just from watching the six people who joined CrossFit DC owner Tom Brose for his class on a Thursday afternoon.

“They tell you,” Minukas says with a smirk.

The small group around Minukas chuckles; Van Halen continues to play in the background.

“So I think that’s part of it. There are a lot of really passionate people out there, and they’ll tell you that [they] do crossfit.”

Brose steps in to add that it’s not just crossfitters who talk about the sport. He says everyone has something to say about it, regardless of whether they’ve tried it.

“Everyone who walks by [CrossFit DC] has to stop and say something about it,” says Brose, who imitates a passerby, chanting in a jockish manner, “CrossFit! Yeah!”

He adds, “Sometimes I just like to sit by the door and listen [to what they say].”

“I think people drawn to it are curious about it, or they just want to comment on it because it’s popular,” Minukas adds. “It’s hard for people to just have a neutral perspective on what crossfit is.”

Crossfit is becoming a cultural phenomenon. Established in 2000, it has grown from one affiliate in Seattle to more than 3,400 worldwide. The practice is structured around traditional body weight movements (push-ups, pull-ups, lunges, etc.), weight lifting and conditioning exercises that combine strength with endurance or bursts of speed.

Proponents of the sport appreciate the intensity of the workouts and the results it produces. Those who oppose it — or, as Brose says, haven’t tried it — mock the sport and frequently refer to it as a cult. Blogs and discussion boards are littered with negative commentary on the sport and rebuttals from those who defend it. The New Yorker has published articles embracing crossfit as a cult; Bethesda Magazine has done the same.

“I do hate the word cultish,” says Lindsey Schwalb, a 27-year-old District resident who’s done crossfit for about a year and a half.

Rather, Schwalb calls crossfit a community.

“The level of camaraderie between the athletes — it’s just unreal,” says Schwalb, who works out at Crossfit Metro Center on New York Avenue. “Lots of high-fives all around — it really is a neat atmosphere.”

This idea of community is something Brose has witnessed since he opened CrossFit DC a year and a half ago. Every day, he sees between 75 and 125 people in his gym. In the class I attended, Brose knew everyone’s name and backstory. One attendee was getting ready to take a big exam; another was in the Coast Guard.

“A lot of people in here brought their friends in. We have people who have become good friends through here, and we have a couple that’s engaged that met here,” he says.

But that doesn’t mean all people who do crossfit only hangout with other crossfitters.

“People do stuff outside of here; they have other social circles,” he says. “For some people, [their social circles] merge together; for some they don’t.”

Schwalb, who works out three to four times a week, says she’s made friends though crossfit, and that’s something she never experienced at previous gyms or exercise studios.

She says one thing that bonds crossfitters is that everyone is “going through the same thing.”

“Whether you’re a world-class competitor or a first-time crossfitter, you’re doing versions of the same workout, so you know what everyone’s going through,” Schwalb says.

Brose says crossfit has a unique ability to attract people from different ends of the exercise spectrum. He sees everyone from “people who have never really exercised and don’t like the traditional gym mentality” to lifelong athletes.

“And we’re all doing the same thing together,” he says.

Jane Coaston, 26, says she was initially turned off by crossfit because she thought it was limited to “Olympic-level athletes.”

“I never really thought it was something I could do,” she says.

After researching the sport for a while, Coaston, a D.C. resident, decided to give it a try, and has worked out at CrossFit DC for about six months.