A town house transformation into a condo tower in a Northwest D.C. neighborhood is so remarkable, it may lead to a change in city regulations.
Listen now to WTOP News WTOP.com | Alexa | Google Home | WTOP App | 103.5 FM
(1/5) 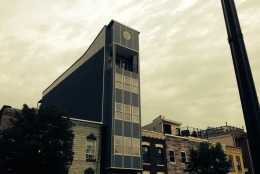 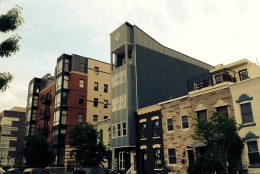 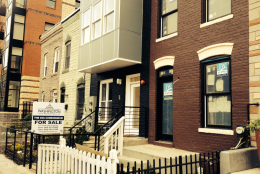 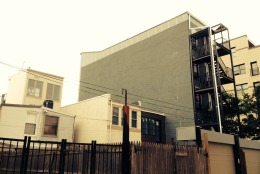 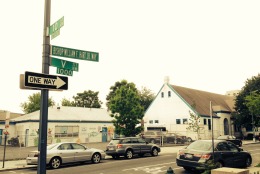 WASHINGTON — Depending who you ask, it’s ugly, beautiful, interesting or amazing.

A town house transformation into a condo tower in a Northwest D.C. neighborhood is so remarkable, it may lead to a change in city regulations.

On V Street between 10th and 11th streets in Northwest, the five-story condo building is nestled between numbers of modest flat-roofed two-story townhouses.

“At this point we’ve just learned to kind of accept it,” says Andrew Wheeler, who lives next door. “But there was a lot of opposition in the neighborhood for a really long time.”

While many passers-by think the architecture and visual affect is beautiful, Wheeler says he thinks buyers are balking at property with such an odd layout.

“The living room is only about six and a half feet wide,” says Wheeler.

The former townhouse property stretches 14 feet wide between neighboring townhouses. Six feet of that space is utilized by the stairwell leading to front doors for each of the three newly constructed condos.

“I think it’s telling that everything here is selling in, like, five days and this has been on the market for four or five months and the first floor unit only just went under contract,” Wheeler says.

Looking west down the block, the condo building’s appearance and height matches a condo building two doors down on the corner of V and 11th streets.

Regardless, D.C. Councilman Jim Graham says he thinks it’s a monstrosity. He wants a city ban on so called “Pop Ups,” in which additional stories of living space are added to existing town homes.

Graham testified before D.C.’s Zoning Commission last November asking for it to address the issue. Changes to the city’s zoning regulations could potentially prevent new Pop Ups from being built.

A March letter to Graham from the Office of Zoning noted that the Office of Planning is “reviewing ways to address inappropriate upper addition through development standards such as upper floor setbacks and changes to permitted heights, and applicable guidelines for these additions that respect neighborhood character.”

Some of those regulations may include changes to maximum height allowances. Such regulations could “help relieve the economic lure to overdevelop larger row homes,” according to the letter.

A comment period on proposed changes to city zoning regulations is open until Sept. 15.