Vinyl is not dead, and a new record store in Georgetown is helping to debunk that myth as LP sales continue to soar over digital downloads.
Listen now to WTOP News WTOP.com | Alexa | Google Home | WTOP App | 103.5 FM
(1/6) 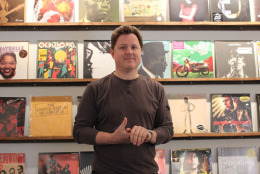 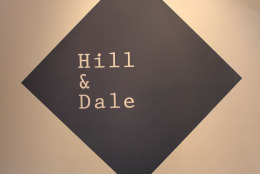 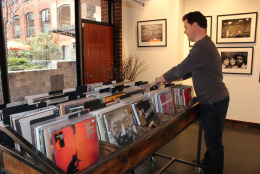 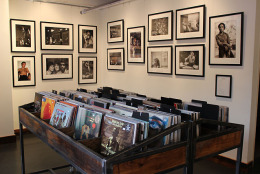 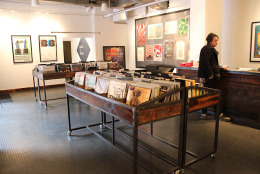 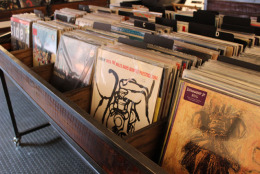 WASHINGTON — Vinyl is not dead, and a new record store in Georgetown is helping to debunk the myth as LP sales continue to soar over digital downloads.

Hill & Dale Records, a brightly lit store tucked away near the C&O Canal on 31st and M streets, is jumping on the trend. It offers new LPs, vintage posters and rock photography in a tidy corner space that once housed an art gallery.

Vestiges of the store’s past remain visible through the exposed brick and clean, open space.

A wall featuring staff favorites is well curated with albums ranging from Chelsea Wolfe’s “Pain is Beauty” to the “Blade Runner” soundtrack.

“One of the things that I appreciate about LPs is that they require some patience,” says Hill & Dale owner Rob Norton. “When you listen to an entire record … you discover music that you might not have.”

But it’s not just the hidden tracks that speak to Norton.

“With the posters, the photography and the beautiful artwork that’s on the LPs, you have a full experience with something that’s physical,” he says.

Which is why the former life sciences-industry spokesman decided to turn one room of his store into a mini-gallery featuring artwork by photojournalist Peter Simon. Legendary musicians such as Joni Mitchell, Bob Marley and the Rolling Stones adorn the walls.

Among Norton’s treasures is an iconic photo of Robert Plant called “I Am a Golden God.”

Such pieces can cost several hundred dollars, but they speak to the ethos behind Hill & Dale.

“We really wanted to carve out a niche,” Norton says.

This includes original posters by 1960s illustrator Joe Eula, who is better known for his work in fashion, but who also illustrated the likes of Miles Davis and The Supremes. A few of these prints are also available in the store, which opened earlier this month.

Since its debut, Hill & Dale has attracted very different customers, Norton says. They range from people in their who grew up on vinyl to their kids and grandchildren looking to discover, or rediscover, something new.

“And there’s also a group of people who come in and buy the LP and they’re not going to open it,” Norton says. “They just like the artwork. I love the spirit of that.”

If opening a record store in 2014 sounds like a risky venture, Norton doesn’t seem concerned. As vinyl sales continue to trump those of CDs and MP3s, Norton says the time is ripe for his new store. In fact, the Washingtonian had been waiting most of his life for the chance to do just this.

“I was talking to Bill Daly from Crooked Beat [Records in Northwest D.C.] and he said last year was his best year,” Norton says.

“The market of people buying vinyl records is growing again.”

And for the first time since iTunes launched its music store in 2003, sales of digital tracks declined in 2013. Vinyl, on the other hand, is in the middle of a six-year upward trend. No longer the exclusive territory of audiophiles, LPs now come accompanied by free downloads so music lovers can listen to albums on all their devices.

“When we decided to go into vinyl years ago, I remember sales reps from distributors saying, ‘You’re crazy – you’re going to be out of business within a year if you do that,'” Daly told WJLA in 2012.

Crooked Beat has now been in business for almost 17 years.

So why tote around a giant LP when you can just download something for 99 cents?

He still remembers the first two records that propelled him into collecting: “Led Zeppelin IV” and Rush’s “All the World’s a Stage.”

“The memories of that [are] so vivid,” he says. “There was something about [the artwork] that really attracted me to records without even hearing what was on the album.”

Click on the gallery above to take a look inside Hill & Dale Records. And check out the website for more information.