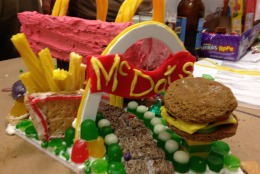 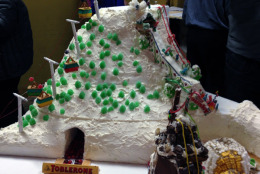 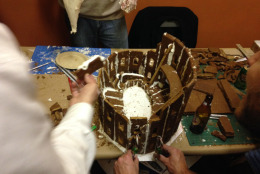 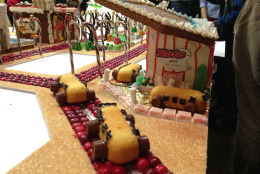 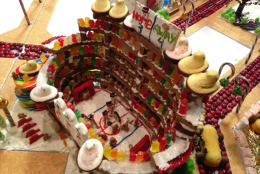 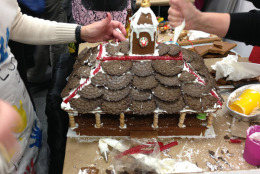 WASHINGTON – If you think a single gingerbread house is challenging to make, imagine designing and crafting an entire mini city out of sweets.

For the eighth year, teams of people who normally work with concrete, glass and steel got together in D.C. Wednesday night with loads of candy, cookies and frosting to create what they call “Gingertown.”

“We have architects, we have engineers, construction companies, we even some developers on the real estate side, so it’s very interesting because everybody’s coming at it from a different angle,” said Katie Garrett, the “mayor of Gingertown” and an employee of David M. Schwarz Architects, the firm that has organized the Gingertown build-off each year and donates the tasty raw materials.

“Because the theme this year is the Gingertown World Games — it’s a sports theme — we have people who are designing ski jumps and half pipes and bobsled tracks. So I think there’s going to be a lot of creativity this year,” she added.

One thing that teams learn quickly, Garrett said, is to know their frostings.

“We always have two kinds here: buttercream and royal icing. The buttercream is purely decorative, you use it to cover a roof [and] decorate some trees. The royal icing is really the glue that holds everything together. So making sure to keep those two pastry bags of frosting separate is very important to the structural integrity of your building,” she said.

Gingertown will be on public display Friday through Sunday in a storefront at 1322 U Street NW, and for the first time you can vote for which building should win the People’s Choice Award. Each vote costs $1.

Public viewing hours are 4 p.m. to 7 p.m. Friday, Dec. 6 and for a $5 donation, you’ll enjoy happy hour drink specials that night at the Fainting Goat bar next door.

Despite their tempting appearance, the buildings of Gingertown will not be eaten.

On Monday, they’ll be donated as holiday displays to eight different D.C.- based organizations including Children’s National Medical Center, Martha’s Table and So Others Might Eat.

Also, 100 percent of the money collected through builder donations, sponsorships and public voting will be distributed equally among the eight organizations.