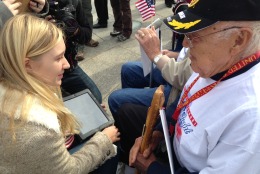 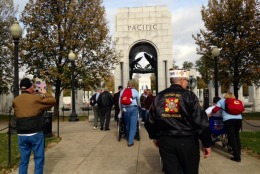 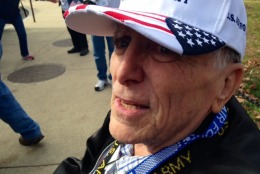 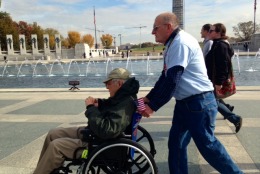 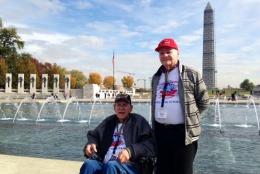 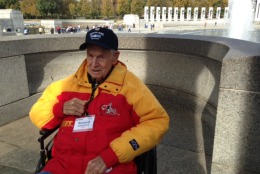 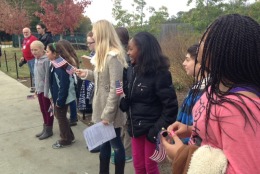 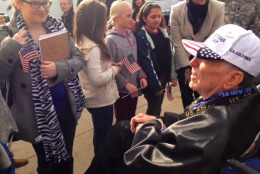 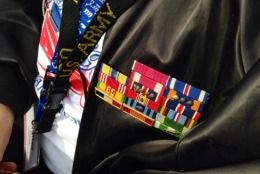 WASHINGTON – World War II veterans in town to see their memorial are meeting with D.C. middle school students as part of their trip.

Sitting in the shadow of the memorial, WWII Marine veteran Michael McEnnis from St. James, Mo., is learning the ins and out of a new app from 13-year-old Zola Bzdek.

“Whoa that’s great. There’s quite a history of stuff in there,” McEnnis says.

The two generations are learning from each other. McEnnis tells Bzdek about his experiences serving the country and Bzdek shows him how to navigate the cataloged history of the war’s memorial on an iPad.

The new app of the WWII Memorial was recently launched by the Trust for the National Mall. Not only does it give the veterans an opportunity to see how their service is being preserved, but it gives them a chance to see how younger generations can interact with their experiences.

“Having children get the opportunity to ask questions to better understand what it was like to fight in a war; why they did it; and what it meant to the world at the time is hugely important to their education,” says Caroline Cunningham, president of the Trust for the National Mall.

It’s a special day for many reasons. For McEnnis, coming to the nation’s capital is a dream realized.

“It’s something I’ve always wanted to do and I finally had a chance to do it,” McEnnis says.

Honor Flight flies veterans of both WWII and the Korean War in to Washington, D.C., free of charge to see the memorial to their service.

While they visit, some are spending time with the kids from Alice Deal Middle School in Northwest.

“The memorial was built for them and anybody else who was helping during the war. I think it’s really cool for them to see this memorial that was built in their honor,” Hardee says.