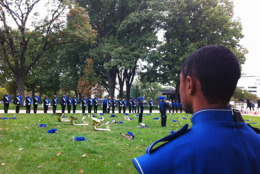 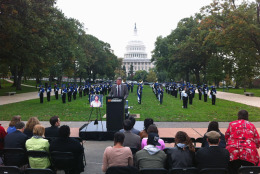 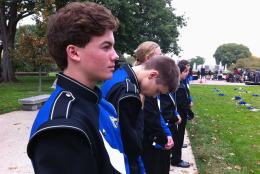 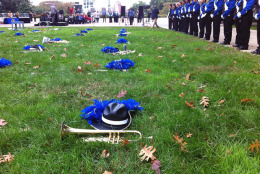 WASHINGTON – The skies were overcast as a crowd gathered in a park across from the U.S. Capitol. Friday. The steel gray clouds matched the somber tone of the message being delivered this October morning: Far too many people have died as they traveled on foot or by bike on area roads last year.

Jeff Dunckel, pedestrian safety coordinator for Montgomery County, says 72 people had been killed on the region’s roadways as they walked to school, biked to work or went out for recreation.

Dunckel made it clear that there are human beings attached to those numbers.

One of those people is 15-year-old Christina Morris-Ward of Germantown, Md.

She was a bubbly teenager who was hit by a car as she crossed a busy street to get to Seneca Valley High school Oct. 31, 2012. Her mother, Gwendolyn Ward, clutched a photo of the girl she called “Tina” and wiped away tears as she got ready to stand and deliver her message to the crowd.

“Whether you’re walking or riding a bike or driving a car, I beg you to be more alert,” Ward said.

“I wish with all my heart, I didn’t have to stand here today and share my story. I miss my daughter. I miss her so, so much.”

The event was part of the kickoff for a regional public safety campaign coordinated by the Metropolitan Washington Council of Governments. The Street Smart public education campaign will include increased law enforcement from Oct. 28 through Nov. 24. Police will work on enforcing laws and educating all pedestrians, cyclists and drivers.

To help illustrate the impact that the loss of life has on communities, the James Hubert Blake marching band, the Roaring Bengals, stood in formation, ready to play. Before they began, Dunckel explained what the crowd would be seeing.

“As they play for you, a bell will ring and band members will set down their instruments and they will leave the field,” he says. “Each band member leaving represents a life now absent from their family, from their loved ones, from our community.”

The strains of “Amazing Grace” started slowly, quietly, then swelled, the sound carrying across the park and drawing passersby. As Dunckel had described, from time to time, a bell would ring out, and one by one, students would carefully set down their instruments, remove their hats, and leave the field.

As the song continued, the volume dropped, the result of fewer and fewer players left on the field. Finally, just one student, Jordan Weber, the trumpet player, was left. He finished the last strains of “Amazing Grace,” the final notes trailing off in the chilly air.

But before the last notes died away completely, a different, familiar, and achingly sad tune could be heard: “Taps.” The crowd was left watching the lone figure on the field, the mournful sound of taps carried on the breeze. There was a long silence after Weber took the trumpet from his lips and lowered the instrument to his side.

Afterward, Weber, a high school junior, commented on the message about road safety and preventing fatalities that the performance attempted to amplify.

“You have to be aware, and you have to know that you’re not invincible and it’s very possible it could happen to you,” he says.

Weber says he was aware of the stunned audience reaction to his performance.

“To go from playing by myself, finishing ‘Amazing Grace’ to playing ‘Taps,’ I mean, it was really big, and powerful for me,” he says.