For tourists and residents, alike, D.C. has an endless list of must-see museums, monuments and historic landmarks. And while double-decker buses, segways and Potomac cruises will take you to the sites, there\'s another way to experience the nation\'s capital -- through your taste buds.
Listen now to WTOP News WTOP.com | Alexa | Google Home | WTOP App | 103.5 FM
(1/3) 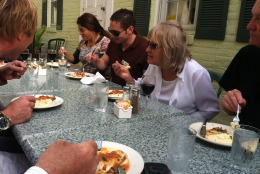 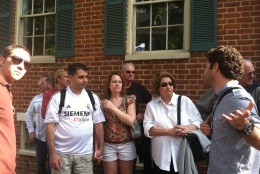 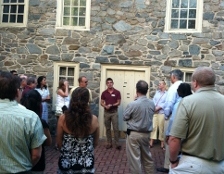 WASHINGTON – For tourists and residents, alike, D.C. has an endless list of must- see museums, monuments and historic landmarks. And while double-decker buses, segways and Potomac cruises will take you to the sites, there’s another way to experience the nation’s capital — through your taste buds.

As the D.C. area’s food scene continues to boom, food tours are attracting tourists and locals who are hungry for a slice of the city’s culture and cuisine.

In 1999, Carolyn Crouch founded Washington Walks, a walking tour company. Three years later, she expanded her list of walks to include a tour of D.C.’s Penn Quarter neighborhood — from a food perspective.

“We felt like it represented a real local aspect of Washington that’s not necessarily about straight history and architecture,” says Crouch, whose tours generally attract 10-12 people. “Locally-owned food businesses and local food purveyors represent an aspect of District life that’s getting more and more attention, so we thought we would highlight that in the tour.”

On the Penn Quarter food tour, guides lead participants on a walk that combines history with gastronomy at local food sites.

“It might be the location of what was once the biggest public market, it might be a place where demonstrations about unfair practices in department store restaurants and lunch counters (took place), maybe where there used to be a dairy processing place in downtown D.C.,” Crouch explains.

The tour also takes participants to locally-owned cafes and shops in Penn Quarter that represent the current food scene in D.C., and tour-goers are encouraged to try a snack or a beverage from the neighborhood vendors. Teaism, Cowgirl Creamery and Pitango Gelato are frequent stops along the tour.

Just across the river in Alexandria, Va., Jeff Swedarsky, 32, led his first food tour in 2008 through the streets of Old Town.

“These places, what do they all have in common?