As Virginia\'s Farmers Market Week draws to a close, WTOP took a trip to the Ballston FRESHFARM Market to get the stories behind the men and women who grow and make our food.
Listen now to WTOP News WTOP.com | Alexa | Google Home | WTOP App | 103.5 FM
(1/5) 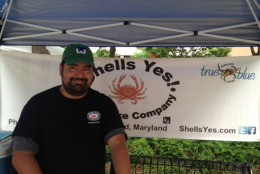 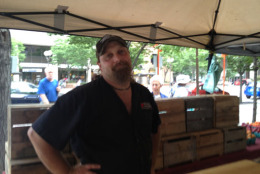 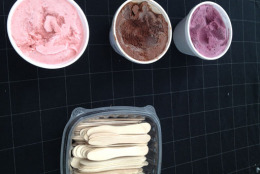 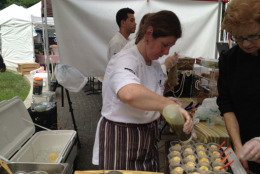 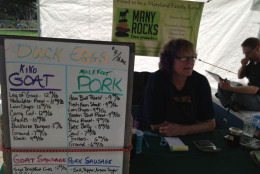 WASHINGTON – Two years ago, John Payne and his wife started selling their Maryland crab cakes at a co-op market in Bethesda. When the couple found out they were pregnant with their first child, Payne decided to take a seemingly steadier job with a hotel chain in Orlando. But when he moved down there, the job was gone.

“We found ourselves down in Orlando, borderline homeless, on food stamps, going to food banks,” Payne says.

With $54 in their pockets, Payne and his wife hopped in a car, drove back up to Maryland and started making crab cakes again.

Last April, Payne started selling his products at FRESHFARM Markets, an organization of 11 farmers markets in the Washington region.

Now, he and his wife sell their line of Shells Yes! products at 12-17 area markets each week and operate a restaurant and bar in Chester, Md.

“We actually had to buy a restaurant to do the production for all of the markets,” says Payne, who is also a co-owner of a Maryland crab and oyster boat. “And because I don’t have enough going on, this past week, we signed a lease for a restaurant in Connecticut (his home state).”

Payne uses local ingredients from area farmers to make his line of gourmet products, such as crab and corn hummus, crab gazpacho and, of course, crab cakes.

“We have the upper hand at markets so we trade crabs for whatever we can. Everybody wants steamed crabs, so I’ll get like four crates of tomatoes for like 2 pounds of crab meat. So it all works out,” says Payne, who also hopes to open a restaurant in Bethesda in the near future.

Payne is just one of the many familiar-faced food growers and producers at the farmers markets sprinkled around the D.C. area.

As Virginia’s Farmers Market Week comes to a close, WTOP caught up with some of the vendors at the Ballston FRESHFARM farmers market in Arlington, Va., to learn more about their lives and their products.

Originally a commercial lard pig, the mulefoot hog was around and strong until the 1930s, when other lard substitutions, such as vegetable oil, became popular, Dietz-Band explains. The breed was near extinction when a blind-taste test changed the minds of breeders, livestock experts, chefs and food critics.

This revelation caught Dietz-Band’s attention. Now, she’s working to bring the breed back.

“We’re working together to diversify the genetics of the breed and one of the best ways to make a use for a breed and keep it here is to create a market for it. It tastes fabulous, so that’s the market.”

In addition to mulefoot pork, Dietz-Band also sells goat meat, goat sausage and an array of jams and jellies, such as Jammin’ Blueberry with Johnny Walker and Red Clover and Sauvignon Blanc Wine.

What do you get when a goat dairy farmer tries his hand at making ice cream? Goat gelato.

“It’s really catching on. The biggest thing is people haven’t heard of it. But it’s picking up,” says William Peachy of Peachy Family Dairy in East Waterford, Pa.

Peachy, who also brings a wide selection of goat cheeses to the market, says you can’t taste the difference in goat gelato and regular gelato. He sells his in flavors, such as chocolate, strawberry and raspberry.

“We only do goats,” Peachy says.

“I actually got to know a lot of people very well and we became friends. And they come back each week to the stand and buy things. It’s neat. They’re like part of your family and I love that,” he says.

For Mickley, honesty and trust with his customers is key. And one way to grow trust is to put a face to the produce for sale.

“I’m going to tell you the truth (about my growing practices),” Mickley says. “If you walk away, I don’t mind because I know you’re walking away because you knew the truth about something. That’s why I do my own markets. I have a lot of stuff to do at home, but if you have a question, I’m the one that has taken care (of the food), picked it, planted it, and

Undaunted, US global media chief plows ahead with changes

Ready or not: Election costs soar in prep for virus voting