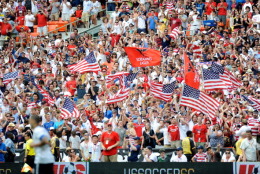 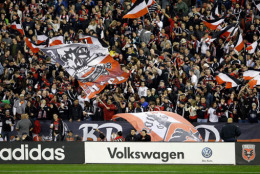 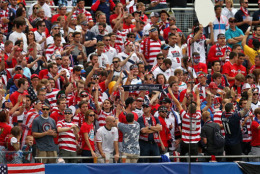 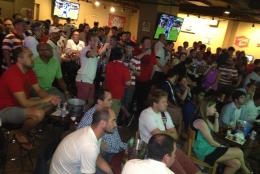 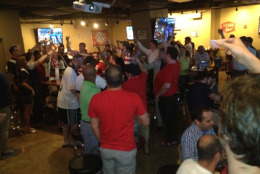 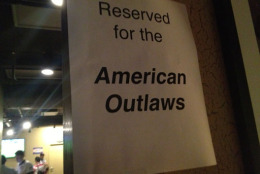 WASHINGTON – “Everybody listen up! If you’re here for the game, Laughing Man is buying shots! Line up!”

It’s 6:45 in the evening, and three blocks from the White House, a group of 200 young professionals are packed into the basement room of Laughing Man Tavern in Northwest D.C.

Half of the crowd is in red-and-white striped jerseys, the other half in pressed suits and Ann Taylor dresses.

The U.S. men’s national soccer team is playing Honduras in a semifinal match of the CONCACAF Gold Cup, a competition that’s held between countries in Central America, North America and the Caribbean.

In the first few minutes of the game, U.S. player Landon Donovan places a ball in the right-hand side of the net, just past the Honduras keeper.

The crowd erupts into repetitive cheers of “USA!”

Beer is passed, hugs are had and another chant begins.

It’s nothing new, but it’s something to be noted: The fan base of soccer in the D.C. area is growing — and at a rapid pace.

D.C. becomes a home for the area’s soccer fans

In 2009, Arlington, Va., resident Justin Coughlan decided it was time for D.C. to be an official home — and hub — for soccer fans.

The city, already home to four spirited supporter groups for Major League Soccer’s D.C. United — one of 19 MLS teams in the country — did not have an organized group to support the sport on a national level.

With the 2010 World Cup in South Africa right around the corner, Coughlan saw no better time to start an organized fan group for the U.S. men’s national team.

“Soccer in America, and especially around D.C., usually gets a fever pitch around the World Cup,” says Coughlan, 39.

He reached out to the American Outlaws, the national team’s supporter group, and proceeded to start his own local chapter.

What began as a group of roughly 125 local members has since grown to more than 700, according to Coughlan.

With the group established, Coughlan needed an official bar for supporters to meet and watch soccer games. In D.C., that bar is Laughing Man Tavern at 1306 G St. NW.

Brendan Ambrose, manager of Laughing Man Tavern, says he has seen an obvious increase in the number of local soccer fans that pour into his bar to watch the matches.

When the tavern became the official bar of the local American Outlaws chapter in 2011, Ambrose says around 30 to 40 people came to the “watch parties,” which include discounted food and drinks for the duration of the soccer game.

Now, he says the crowd in the bar is upwards of 170 people at each match.

“The better the U.S. team does, the more supporters they get,” Ambrose says. “They’re a phenomenal crowd.”

“We’ve basically created a soccer hotbed that kind of gravitated to places outside of D.C., like Annapolis, Baltimore, Frederick, Richmond and Virginia Beach,” says Wine, who adds that all of these cities have established Outlaw chapters or soon will have one.

For Wine, having a bar to call “home” for soccer matches does more than just bring together local fans. It’s also about providing a space for out-of-town fans to watch the game when passing through the area.

“Little by little, we’ve always wanted to dedicate one bar to make sure that when people, like this guy here who is from Buffalo, he knew to come here because we’re always here for every match. That’s kind of the norm now. That people know no matter where they are that we have a network of bars to go to that you can meet like-minded fans and watch the game and the game will be on,” Wine says.

Because of the uptick in the number of soccer fans Ambrose sees in his bar, he is planning to open early to show English Premier League games, an association of professional club teams, when the new season starts in August.

“We’re finding that even though soccer is new in America, most of the supporters are following the European leagues,” says Ambrose.

That observation is something the country’s broadcast channels also are noticing.

NBC Sports announced it will show all of the Premier League games on the NBC family of networks this year. The games previously were only available on the Fox Soccer Network, in conjunction with ESPN.

“There is tremendous interest in the Premier League here in the states and we are excited to present it in a more robust way than ever before anywhere in the world,” Jon Miller, president of programming for NBC Sports and NBC Sports Network, tells WTOP. “When we were putting together our coverage plans we decided we wanted to do something that’s never been done before anywhere in the world — make all of the games available … We think American fans are ready for it, and frankly we can’t wait to kick off on Aug. 17.”

However, the international clubs are not the only teams in which Americans are investing their interest.

In 2012, attendance at MLS games in the U.S. surged to a record 6 million spectators for all of the 19 teams combined. Growing 5 percent over 2011 figures, 2012 was the second straight year during which MLS attracted more fans per game than both the NHL and NBA, with an average of 18,807 fans per match, according to Yahoo! Sports.

With four titles under the team’s belt and a boisterous crowd of supporters, D.C. United is hoping to capitalize on this thriving interest.

The team announced in July its plans to build a new $300 million stadium at Buzzard Point in Southwest D.C. Since its inception in 1996, the team has played at RFK Stadium, the former home of the Washington Redskins.

Fever pitch: Getting ready for Brazil

Perhaps it’s not a coincidence that soccer is becoming more popular in the U.S. The men’s national team is on an 11-match win streak, the longest in the history of the program. The streak started in June at RFK Stadium with a win over Germany, annually one of the best teams in the word.

This year, the U.S. men’s national team won the Gold Cup, as well as three straight home qualifiers in June over Panama, Jamaica and Honduras, vaulting them to the top of the World Cup Qualifying group and giving them a 99.8 percent chance of locking down a spot in the 2014 World Cup, according to ESPN FC.

In 2010, Washington-area residents got a taste of the contagious World Cup spirit that takes a city by storm.

Coughlan says around 2,000 came to Dupont Circle to watch the U.S. vs. England match. The American Outlaws showed the game on two screens in the circle, and bars throughout the area overflowed for the nail-biting U.S. vs. Ghana game.

“It was incredible being here in 2010 for the World Cup because you would see so many people wearing U.S. gear and you would wave at them and chat soccer with them as you were walking the street,” Coughlan says.

This year, Coughlan and 500 other American Outlaw members are chartering three planes to the World Cup in Brazil to watch the games firsthand.

“I just can’t imagine a chartered plane with passionate U.S. soccer supporters flying down to Rio. That’s going to be awesome,” he says.

But Coughlan says not to worry. He will leave other American Outlaw members in charge of organizing festivities and watch parties for fans in the D.C. area.

“It’s such an international city, so the World Cup is always the best time,” Coughlan says.